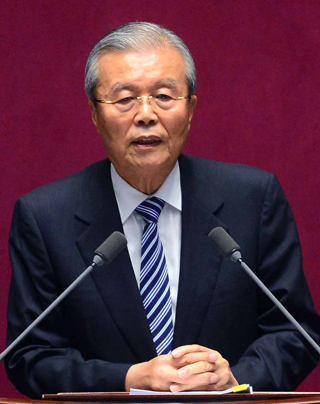 Kim Chong-in, interim leader of the Minjoo Party, delivers a speech to the 20th National Assembly on Tuesday. [NEWSIS]

The main opposition party leader outlined plans to restrain the nation’s conglomerates, stressing the importance of economic democratization and saying that the party’s future presidential nominee will emphasize these reforms. Rep. Kim Chong-in, interim leader of the Minjoo Party, gave a speech to the National Assembly on Tuesday expressing the party’s desire to curb conglomerate tycoons’ abuse of power by proposing to immediately revise the commercial code and abolish the Fair Trade Commission (FTC)’s exclusive complaint right.

Under the current system, prosecutors’ indictment of unfair trade activities requires an official complaint by the FTC, although prosecutors can ask the FTC to submit it if necessary. According to Kim, abolishing this system will be a symbol of the “people’s will” to rectify the institutionalized monopoly that has afflicted the Korean economy for so long.

Kim also said the party will push for an Assembly hearing to clarify the legitimacy of investment into insolvent businesses during the restructuring period. He said that the government is not supposed to pour money into restructuring procedures, but instead create a suitable market environment for these businesses to restructure on their own. “The hearing will be against Korea’s iron triangle,” he said, “a chain of corruption linking government-run banks, interested corporations and the government, which pours money collected through taxes into abnormal restructuring.”

“It’s not too much to say that economic democratization is the raison d’etre of legislature,” said Kim. “It means we should prevent the country from being ruled by gigantic economic powers.”

Although the legislatures of developed countries such as the United States and Japan also understand the need for economic democratization, it does not often manifest in practice due to the lobbying activities of “enormous economic entities,” Kim said. “Legislatures should not represent these entities,” he added. “Their duty is to keep these entities in check.”

Concerning economic policies, Kim said that the current debt-driven growth model should be shifted to “inclusive growth,” which aims to solve inequality across different segments of the population. “The state should intervene and design an income redistribution labor market, healthcare services and improved education for sustainable job creation and economic development,” he said.

Furthermore, Kim said that the party wants to finance economic democratization efforts by returning to the 21 percent tax rate from the current 18 percent. “Five years ago, the United Kingdom’s government budget was cut around 20 percent under Cameron’s leadership, but it worked well without any problem. When the new government comes, we will secure additional revenue sources by changing the entire government budget.”