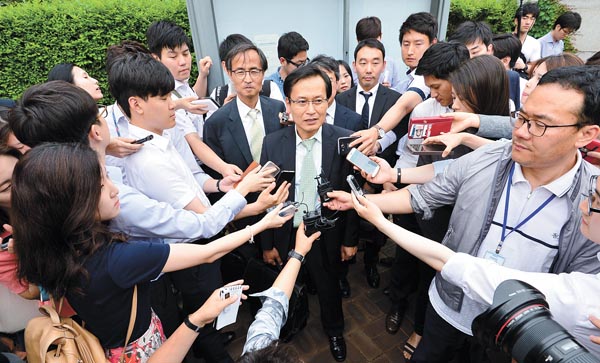 Attorneys from the Lawyers for a Democratic Society hold a press conference outside the Seoul Central District Court on Tuesday. [SHIN IN-SEOP]

A Seoul court held a hearing Tuesday after a group of lawyers challenged the legitimacy of the South Korean government holding a group of North Korean restaurant workers who defected in April in a state protection facility.

Last month, the Lawyers for a Democratic Society, also referred to as Minbyun, filed a petition with the Seoul Central District Court questioning whether the defectors came to the South out of their own free will, after the country’s top spy agency denied an interview with the defectors.

The defectors themselves did not attend the first hearing at the Seoul Central District Court on Tuesday afternoon, but their legal representatives did. On the same day, the National Intelligence Service (NIS) decided that the 13 North Korean restaurant workers would not be sent to a defector resettlement facility but rather be kept in a protection facility that it operates.

The group of 12 female workers and their male manager who worked at Ryugyong in Ningbo, Zhejiang Province, one of Pyongyang’s many overseas restaurants in China, defected to the South in early April.

The South Korean government received them on humanitarian grounds and announced on April 8 that the workers defected because of a shared, growing skepticism of the North Korean regime, a rare move as information on defections is usually kept under wraps.

Their defection came as North Korean restaurants overseas were under pressure to send more money back home, as the international community imposed new sanctions on North Korea following its fourth nuclear test in January and a subsequent long-range missile launch in February.

The North Korean government claimed that the 13 were kidnapped by the South.

In mid-May, the progressive lawyers association asked the government if it could meet with the defectors to clarify whether they defected to South Korea voluntarily. The NIS rejected their request.

Consequently, Minbyun filed a writ of habeas corpus with the Seoul court on May 24 to determine if the defectors were being held against their will by the South Korean government.

The Seoul court told the NIS to allow the defectors to appear for a hearing scheduled for Tuesday, although the workers eventually had legal representatives stand in for them.

The NIS decided Tuesday that the defectors from Ryugyong restaurant will not be sent to a state-operated resettlement facility.

Instead, a government official said Tuesday that they will remain at the North Korean Defector Protection Center run by the NIS in order to guarantee their safety and protect their identities as they adjust to life in the South.

In 2014, the NIS renamed the controversial Joint Interrogation Center to the more gentle-sounding North Korean Defector Protection Center. Defectors can remain at the protection center for a maximum of six months.

Usually, North Korean defectors are sent to the Ministry of Unification’s Settlement Support Center for North Korean Refugees, or Hanawon, in Anseong, Gyeonggi, where they undergo resettlement education for around 12 weeks to get used to living in the South.

A government official said the 13 defectors are adjusting well to life at the NIS-run protection center, which is located in Siheung, Gyeonggi.

“The North Korean restaurant workers are receiving fundamental education necessary for resettlement into South Korean society at the protection center,” the official said.

“Every day at a set hour, they watch news and dramas on TV to get to know South Korean society.”

They also go on escorted excursions in smaller groups to supermarkets and family-style restaurants to grow accustomed to facilities in the South.

Some of the young women are aiming to attend university after resettlement, and are studying various subjects including English.

Park Young-shik, an attorney representing the Korean Bar Association, who serves as a human rights adviser to the NIS, is one of the few South Korean civilians who has had contact with the defectors.

“They are all healthy and adjusting well to South Korean society, but if possible would like to live privately,” she said.

The women are said to be generally in their early 20s, healthy in appearance, and generally between 157 and 160 centimeters (5-foot-2 and 5-foot-3) tall.

However, they do not mingle with the other defectors and are taken care of separately in the facility.

In a statement on Tuesday, an association of defector groups criticized Minbyun’s attempt to get the defectors to appear in court and said it will file charges against the lawyers association.