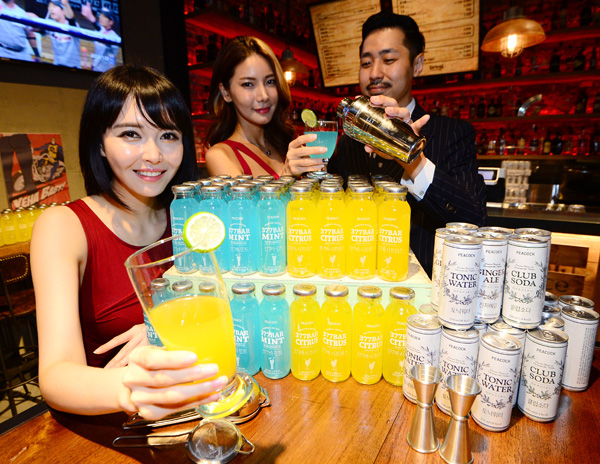 Dubbed “377 Bar,” it is the first product from what has been called “Peacock Secret Laboratory,” the retailer’s new R&D center that opened at its headquarters in Seongsu-dong, eastern Seoul, last month.

The five flavors come in two categories: citrus and mint-flavored stand-alone drinks; and tonic water, ginger ale and soda water for cocktail mixers. The fruit-flavored drinks cost 1,280 won ($1.10) per 245-milliliter (1-cup) bottle, and the others cost 4,380 won per six-pack.

The discount franchise said it was reacting to a recent surge in the popularity of mixed drinks.

According to E-Mart, beverage sales decreased by 3.1 percent year on year in 2015, but sales of mixers such as tonic water and lemon tonic jumped by 9.3 percent.

In order to boost the drinks’ quality, E-Mart joined forces with bartenders from Valut+ 82 and The Booze, two high-end bars in Seoul.

The ability to control all facets of a new product is the biggest advantage to having its own R&D center, an E-Mart spokesman said. The process began with sensory tests and runs through test-tastes of the end product.

To raise awareness of the brand, E-Mart is planning a cocktail show in July featuring famous bartenders in Seoul who will demonstrate their techniques.

The spokesman said energy drinks and sports drinks are also in the R&D pipeline, but refused to give any details.