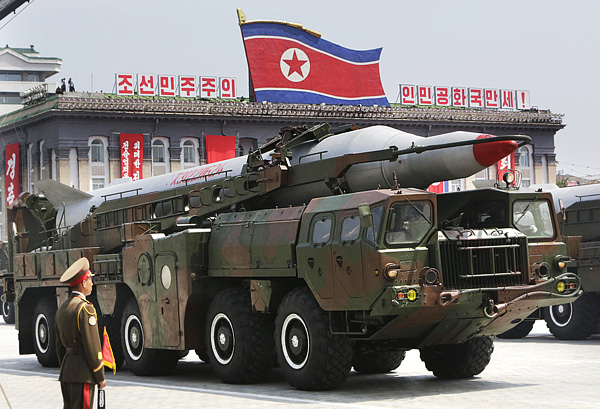 A Musudan missile shown in a military parade in Pyongyang on July 27, 2013. [NEWSIS]

While 400 kilometers fell far short of the Musudan’s 3,500-kilometer capability, which puts U.S. military bases in the Pacific within range, South Korea was alarmed at the technological progress shown.

Pyongyang carried out its fifth and sixth intermediate-range ballistic missile (IRBM) tests at 5:58 a.m. and 8:05 a.m. Wednesday from the eastern coast city of Wonsan in Kangwon Province, the Joint Chiefs of Staff reported.

“The first one disappeared after it was detected by radar while the second one flew about 400 kilometers,” said a Joint Chiefs of Staff official who asked not to be named. 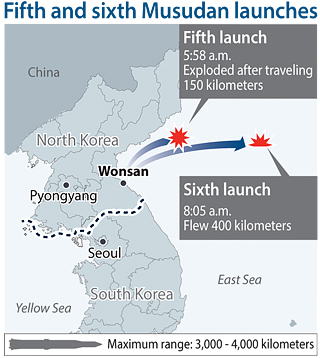 He added that the South Korean and U.S. militaries were assessing the trajectories of the two missiles.

If successful, Pyongyang’s IRBMs would be capable of hitting any part of Japan and as far as Guam with a range of around 3,500 kilometers. Because they are launched from mobile launchers, it is difficult to detect their origin.

The exact causes of the failures are still being determined by Seoul and Washington.

It is possible that North Korea intended its sixth Musudan missile to fall after flying 400 kilometers to prevent it from going over Japan, which would have prompted the country to respond militarily.

“Both of the two missiles launched today were detected by radar, which indicates that the two rose above the horizon and flew at a steady altitude,” another military official said, also speaking on the condition of anonymity, “We have yet to confirm whether North Korea intentionally had the [second] missile explode in mid-air or whether there were technical glitches that caused the failure.”

It is also possible that the North shot the missile at a higher angle than normal on a launching pad so that it would soar into the sky but fly a shorter distance to avoid trouble with Tokyo, which has readied its Self-Defense Forces to intercept any ballistic missile from North Korea that enters its airspace.

The two Musudan launches came after a string of IRBM launches over the past two months as Pyongyang seems to want to show the world that it has the capability of hitting U.S. bases in Guam, possibly with nuclear warheads mounted on top.

The North’s Musudan missile was first deployed in 2007 but wasn’t tested until last April.

North Korea test-fired its first Musudan missile on April 15 in what was described as the result of North Korean leader Kim Jong-un’s direct order, but it exploded just seconds after the launch.

The North carried out its second and third Musudan launches 13 days later. The second crashed after flying less than a kilometer, and the third was estimated to have flown a few kilometers. Its fourth test on May 31 was believed to have exploded on a mobile vehicle launching pad.

The four botched launches were seen as an embarrassment for the leader, who ordered his military in March to “carry out ballistic rocket launches” that could have nuclear warheads mounted on them “in the nearest future.” Kim made clear his intention to continue the regime’s pursuit of nuclear weapons at the party’s seventh congress held in May.

The series of failed missile tests raised speculation that the North is rushing to develop IRBM technologies without enough analysis into what went wrong. Experts say it is not normal to launch a missile soon after a failure, as a failed test usually requires one to two months of assessment.

The two launches on Wednesday drew immediate backfire from Seoul and Washington.

“We gravely warn North Korea that it will face stronger pressure and sanctions from the international community and South Korea as we harshly condemn its action [Wednesday],” ministry spokesman Cho June-hyuck said.

With the latest provocations, it has become even more unlikely that the two Koreas will sit down any time soon to try to improving frozen relations. Pyongyang has made a number of overtures proposing talks since May, all rebuffed by Seoul, which considers them “insincere” and “fake.”

The U.S. State Department also lashed out at the North for the two launches on Wednesday.

“These provocations only serve to increase the international community’s resolve to counter [North Korea’s] prohibited activities, including through implementing existing UN Security Council sanctions,” spokesman John Kirby said in a statement. He added the U.S. would work to “bolster international resolve in holding [North Korea] accountable” for the launches.