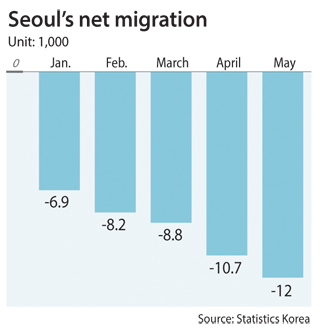 Seoul’s population fell below 10 million in May for the first time since 1988, largely due to the high cost of housing.

The city’s net migration rate has in fact been negative for 87 consecutive months, according to a report by Statistics Korea released on Thursday. Last month, a total of 123,743 people moved into the city as 135,701 people moved out, creating a loss of 11,958 people.

“It appears that many people are relocating due to the high housing prices in Seoul,” a Statistics Korea official said Thursday.

The agency added that net outflows reached 137,000 people last year, and 85,000 of them, or 62 percent, said they are leaving due to “housing-related issues.”

Family, job and education were some of the other reasons that people left the capital last year.

In May, the average purchase price for a residence in Seoul rose 3.59 percent compared to the previous year, and the price for jeonse, or a lump-sum deposit rental contract, increased by 5.91 percent during the same period, according to a KB Kookmin Bank monthly report released earlier this month.

The national average residence price, on the other hand, was 296 million won, and the average jeonse deposit was 201.4 million won.

The number peaked at 10.94 million in 1992 and has been declining ever since.

“A large number of young graduates in their 20s are leaving Seoul because they have a hard time finding jobs and places to stay due to the high housing costs,” a Seoul Metropolitan Government official said.

Some experts say the city’s finances may suffer as more people leave and the average age of people within the city continues to increase.

In fact, people over the age of 65 accounted for 12 percent of Seoul’s total population as of 2015, but that figure is expected to reach 30 percent by 2040, which means the city has to be prepared to pay more for welfare.

Kim Soon-eun, a professor of public administration at Seoul National University, pointed out that city projects such as expanding heavy traffic roads might not be so useful since the population will continue to decrease.

As people leave Seoul, the number of those moving into nearby Gyeonggi has grown considerably - indeed, the net inflow was 10,377.

Sejong City and Jeju came in second and third for net inflows in May, with 2,278 and 1,458 people entering those areas.

In addition to Seoul, other big cities such as Busan and Daegu also experienced net outflows last month, with Busan’s net outflows reaching 1,719 while Daegu’s reached 1,191.

A total of 589,000 Koreans relocated last month, a decrease of 2.7 percent compared to the previous year.

An official at Statistics Korea said fewer Koreans are relocating overall due to the sluggish economy.