Oldest accordionist gets groove back

Oldest accordionist gets groove back 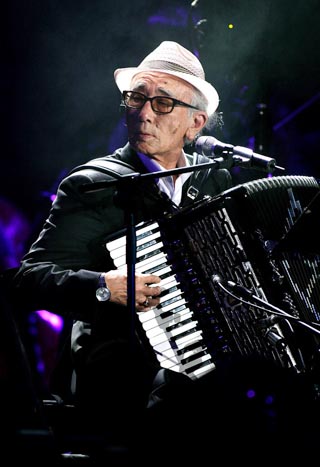 Shim Sung-rak, 80, will stage a concert next month for those who supported him in raising money to purchase a new accordion. [PAPER RECORDS]

When a fire broke out at the home of Shim Sung-rak last month, it destroyed his most valuable possession: an accordion.

After all, the 80-year-old is the oldest living player in Korea.

But now, thanks to donations by hundreds of people, Shim can finally afford to buy a replacement.

Choi Sung-chul, director of the production company Paper Records, set up a crowdfunding campaign on Tumblbug to raise the money.

The Korea JoongAng Daily published an interview with Shim about the fund-raising effort on May 27.

Shim’s accordion, which was a 30-kilogram (66-pound), Italian-made Super Paolo Soprani, was both his most treasured item and sole source of income.

Shim had purchased it in the early 1980s for about 3.3 million won, requiring most of his savings at the time.

Shim was often referred to as the “presidents’ musician,” as he was adored by former Presidents Park Chung Hee, Chun Doo Hwan and Roh Tae-woo while they were in office.

He is also highly respected by younger musicians for both his talent and willingness to accompany them on stage despite a childhood injury.

Shim plays the accordion with only nine fingers, as he lost a part of his little finger in an accident when he was a young boy.

The elderly player said he couldn’t imagine that so much money could be collected in such little time using a computer, adding that there was no other word for the event than “miraculous.”

As planned, Shim will hold a concert for his supporters on July 14 with his new accordion, which will feature a belt stitched with the names of each donor.

The venue has yet to be finalized.