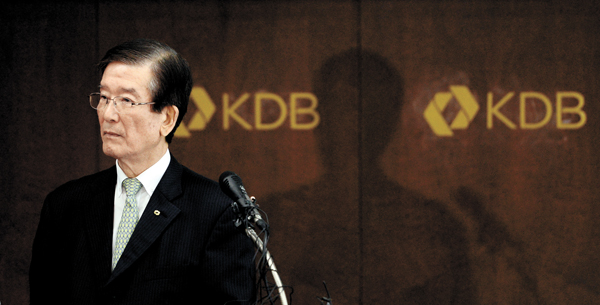 Lee Dong-geol, chairman of KDB Financial Group, takes questions from reporters on the state-run bank’s measures to enhance management of subsidiaries including the troubled shipbuilder Daewoo Shipbuilding & Marine Engineering at a press conference held at its headquarters in Yeouido, western Seoul, on Thursday. [NEWSIS]

Korea Development Bank (KDB), the main creditor of troubled shipbuilders and shippers, announced on Thursday that it will end the long-held practice of so-called parachute appointments at its subsidiaries. It also will reduce the number of nonfinancial affiliates by 2018 as part of its overhaul plans.

Parachute appointments occur when politically connected bigwigs use their clout to gain plum retirement jobs, either at government corporations, state-run agencies or even in some private sector positions.

The announcement to overhaul the state-run financier comes amid growing criticism at the institution for failing to manage debt weighing on the country’s major shipbuilders like Daewoo Shipbuilding & Marine Engineering (DSME) for years.

The overhaul includes the sale of 132 nonfinancial companies in which the bank either has a majority stake or serves as the main creditor. The original plan was to sell 36 companies by this year, but the bank decided to speed up the process and sell 46 by this year, 44 more in 2017 and complete sales of all companies by 2018.

KDB introduced six major overhaul plans to be executed through its control tower dubbed the “KDB Reform Committee” consisting of 40 to 50 professionals from industries, academia and legal authorities under the leadership of the chairman himself.

The bank will suspend its board directors from working at these companies, though an exclusive condition was attached that there may be cases where employment may be allowed after a tight screening process.

It was an emergency response against a recent report by the Board of Audit and Inspection that the bank has put DSME in trouble due to its incompetence and immorality. A former vice chairman of KDB, Kim Gap-jung, sent as chief finance officer for the shipbuilder in 2012 through 2015, has been pointed to have played a role in DSME’s book cooking.

KDB is a main creditor of the troubled shipbuilder.

KDB Financial Group Chairman Lee Dong-geol and high-ranking officials of the bank bowed their heads at a press briefing held at its headquarters in Yeouido, western Seoul, and said, “All staff members of KDB feel burdened to have put a scratch on KDB’s 62 years of history and to disappoint the public with the recent crisis.”

On speculations of whether the government and other financial authorities were pressuring the bank to speed up the plans, Lee answered, “Many have suspicions the bank is moving under external pressure, but this is purely out of the bank’s own decision, and we aim to push forward our reforms aggressively when we have decided to do so.”

Other measures include enhancing capability to support industry restructuring, adding financial support for small and midsize companies’ overseas business, tighter credit assessment on all industries and improving its asset portfolio.

As part of the bank’s proposal to improve its backing for company restructuring, reporters asked if it will inject more capital into the troubled shipbuilder.

“It is hard to tell whether or not we will, since our comments can greatly affect the fate of the shipbuilder,” Lee said. “But the overall agreement is that we cannot waste the taxes from our public.”

On whether DSME’s credit rating will be downgraded from “normal” to “precautionary,” the bank said, “We have more things to consider as the state-run bank such as the country’s situation and related effects the decision may bring. We will have to downgrade when needed, but this is not the time yet.”

The Export-Import Bank of Korea also proposed similar overhaul measures that involve organizational restructuring and enhancing the integrity of its management through an external overseeing group.

As part of an effort to make the organization lean, it will slash two of the nine operating offices and cut the number of vice chairman-level jobs from 10 to eight. Operating costs for the bank will decline 10 percent this year with more cuts due next year.

In the rescue of the troubled state-run banks, which are major creditors of the nation’s troubled shipbuilders and shippers, the government had proposed creating a fund of up to 12 trillion won ($10 billion), most of it financed by the central bank, on June 8.