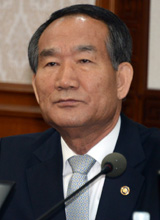 The Minjoo Party, the People’s Party and the Justice Party jointly sponsored the resolution to demand the dismissal of Minister of Patriots and Veterans Affairs Park Sung-choon, which they submitted to the National Assembly in the morning.

“We demand President Park Geun-hye to fire Minister Park as soon as possible since he is a harm to cooperative politics,” Rep. Park Wan-joo, deputy floor leader of the Minjoo Party, said. “President Park must study the people’s sentiments carefully and make a decision.”

“Listening to the opposition parties’ reasonable request is cooperative politics,” said Rep. Kim Kwan-young of the People’s Party. “We believe the Saenuri Party will also cooperate with our request when it is deliberated at the House Steering Committee.”

In the resolution, the three parties said Minister Park’s latest plan for a military parade to mark the Korean War anniversary later this week was a grave insult to the public as his plan included the 11th Airborne Brigade, responsible for the massacre of citizens on May 18, 1980 during a democratic uprising in Gwangju, to march in that city.

“The plan mocks the citizens of Gwangju who defended Korea’s democracy against the martial law army,” they said. “It was also an insult to the nation by disgracing the spirit of the democratization movement against the military dictatorship.”

They also said the plan to allow the airborne unit to parade in front of the old South Jeolla Provincial Government building, where the soldiers brutally injured and killed Gwangju residents, would be to deny history and the spirit of democracy.

The resolution will be reviewed by the House Steering Committee, chaired by Rep. Chung Jin-suk of the Saenuri Party. Of the 28 members, 11 are Saenuri lawmakers, including Chung, and the rest are opposition politicians.

Since the opposition parties occupy more than 60 percent of the seats, the resolution is expected to pass smoothly in order to advance to the main session. Because the resolution is not a bill to legislate a law, it will skip the Legislation and Judiciary Committee and be voted directly at the plenary session. And since the opposition parties largely outnumber the Saenuri Party, it is likely to be passed.

This marks the third time that lawmakers have tried to demand the minister’s dismissal, but none of these attempts have made it to a vote.

Minister Park was appointed to the post on Feb. 24, 2011 by then President Lee Myung-bak. Park kept him to the post after she took office and he has been serving now for five years and five months.

While working as the head of the military intelligence at the Joint Chiefs of Staff in July 2004, Park, now a retired three-star general, was investigated by the Defense Security Command on charges of leaking a communication between the two Koreas’ patrol boats to journalists. He requested a voluntary discharge and joined Park’s failed presidential primary campaign in 2007.

When the Park administration faced fierce public criticisms after its poor handling of the Sewol Ferry’s sinking in 2014, Minister Park compared the situation to the Sept. 11 terrorist attack in the United States. “When the United States is in crisis it unites,” he said at the time, “but when we face trouble the people attack the president and the government first.”