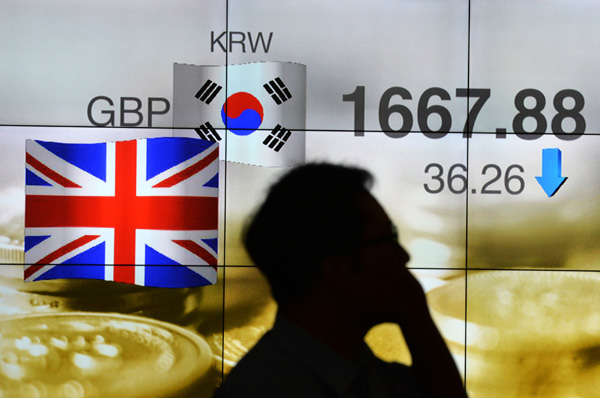 A display at Mirae Asset Center 1 Building in central Seoul shows the United Kingdom’s pound sterling plunging 36.26 against Korea’s won on Friday. The pound dropped to its lowest level against the dollar since 1985 as the U.K. referendum ended with a 52 percent to 48 percent victory for the “Leave” campaign. [NEWSIS]

As news of the United Kingdom’s vote to leave the European Union sunk in, Asia’s financial markets including Korea’s panicked on a so-called Black Friday, fearing a ripple effect that the British exit will have on global financial markets and the international economy.

Up until early morning, investors and experts here were betting on Britain voting to stay in the EU, sending the Kospi to the 2,001 level as of 9:01 a.m.

Trading on the country’s secondary tech-heavy Kosdaq was halted for five minutes at around 12:50 p.m. as the index fell more than 6 percent.

The Korea Exchange, operator of the stock indices, issued a sidecar for the Kosdaq for the first time since Feb. 12 to help stabilize the market.

A sidecar is issued when the futures prices of the Kosdaq 150 index rise or fall more than 6 percent and the spot prices show 3 percent rises or falls for more than one minute.

The issuance of a sidecar is limited to once a day.

“There are high possibilities of increasing capital outflows, a flight to safe assets and a rising won-dollar exchange rate,” said Kim Jung-sik, an economics professor at Yonsei University. “Since London is an international financial center, which also represented the eurozone, Britain’s status in the global financial market might be shaken, and this will spike jitters in the global market.

“If the influence of the British vote is limited to that country, the financial shocks might fade away in the short run, but if other EU members follow the British lead, the impact on the global financial market will be significant and lengthy,” Kim added.

The Japanese yen broke the 100 mark against the dollar during the day for the first time since November 2013. It closed at 102.64 yen per dollar, up 2.25 from the previous day.

The British pound marked its all-time low since 1985, plunging 7.21 percent against the dollar.

“As preferences for safe assets grow, the yen and dollar are expected to appreciate, while the British pound will continue falling,” said Lee Ji-seon, a researcher at LG Economic Research Institute.

“The impact of the British exit might affect the financial market for five years at the shortest, 15 years at the longest. Some even say 30 years.”

Since significant amounts of British money flowed into the Korean market in March and April, there could be an exodus of the money soon, she said.

“Because Korean stocks are not considered safe assets, there might be additional selling by foreigners, including those from Ireland and the Netherlands,” Lee said.

The Kospi is forecast to continue declining for a while, according to market analysts.

“The Kospi is expected to go down below the 1,800 mark, led by selling sprees by foreigners,” said Kim Hyung-ryul, investment strategy head at Kyobo Securities. “It is difficult to predict how the upcoming earnings season will change the current situation.”

Officials of the Ministry of Strategy and Finance, Financial Services Commission, Bank of Korea and Financial Supervisory Service met to discuss emergency measures to stabilize the market at 2 p.m. on Friday.

“In response to the growing volatility in the foreign exchange market, the government will take measures including smoothing operations,” Choi Sang-mok, vice finance minister, said at the meeting. “The government and financial authorities will closely monitor the foreign exchange market and foreign capital inflows and outflows as part of efforts to minimize the negative impact on the Korean economy.”

If the situation turns sour, an emergency meeting presided over by Yoo Il-ho, deputy prime minister for the economy, will be convened.

“As global financial markets will undergo high volatility and uncertainties, a negative impact on our market will be inevitable for the time being,” Choi said. “However, Korea’s strong economic fundamentals - including the current account surplus - are the world’s best, so the impact should be less than elsewhere.”

Choi also hinted the government might consider currency swap arrangements with members of the Group of 20 and international economic organizations like the International Monetary Fund to improve global financial safety nets. He declined to comment on which countries might do the currency swap plans.

“Korea’s direct exposure to Britain in the real economy is not that large, so the immediate impact will be limited for now, but it might be affected by changing conditions in the global economy,” Choi said.

Other than Korea, the Japanese market took a beating from the British referendum result. Its Nikkei225 plummeted 7.9 percent on Friday.