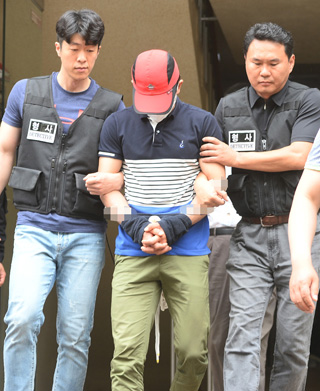 The 36-year-old rape and murder suspect surnamed Kim, who told police he stalked a complete stranger, walks from the victim’s apartment in Gaepo-dong, southern Seoul, escorted by the police after a crime re-enactment Friday. [NEWSIS]

The 36-year-old sex offender arrested last Saturday for allegedly murdering a 60-year-old woman in Gaepo-dong, southern Seoul, did not know his victim as he claimed.

Police now say he stalked a complete stranger, sneaked into her house to rape her and then killed her so he wouldn’t get caught.

After his arrest on June 18, the suspect, surnamed Kim, claimed he met the victim while working at a real estate agency and had known her for about a month. He told police he asked her to lend him money and murdered her when she refused.

But investigators found no record of calls or texts between the two.

Under questioning, Kim changed his story. According to police, Kim saw the victim in a parking lot on June 14, two days before the murder. Security camera footage caught him in the same parking lot as the victim.

He tailed her as she drove to her residence because he wanted to develop a “good relationship” with her, Kim said, according to police. He followed her into the apartment building elevator and introduced himself as an insurance salesman, a profession he had started to study.

He asked to come inside her apartment to tell her about policies and she agreed. When she punched the code into the security keypad of her apartment, he noted the combination of numbers.

He allegedly stayed inside the apartment for some 20 minutes.

The following day, security camera footage caught Kim revisiting the apartment and going in and out of the building four times, though he did not enter the victim’s residence.

The next day, he went back and, realizing the apartment was empty, entered and hid. When the woman returned, he threatened her with a kitchen knife and allegedly raped her. He then demanded money, and when she started shouting for help, he allegedly strangled her to death.

Kim wiped off his fingerprints with a towel and removed potential evidence including the towel, the victim’s clothes and blankets. He also took cash from the victim and a bankbook.

Autopsy results revealed that Kim’s DNA was present in the victim’s body.

Kim said, according to police, “I committed the murder because after the sexual assault and robbery, I was afraid of getting caught.”

Kim was released on parole this year after 10 years in prison for sexual assault. He was obliged to wear an electronic ankle bracelet until 2025, but broke the device and roamed free after the murder.

A police spokesperson said that in his previous crime, Kim had used a similar modus operandi: he stalked a 40-year-old woman near her apartment and followed her inside.