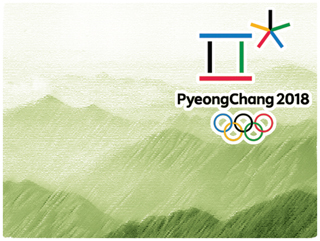 Flying to Asia this summer on Korean Air, I cannot help but notice the advertisement playing on the in-flight entertainment system regarding the PyeongChang Winter Olympics and PyeongChang Special Olympics of 2018. The theme of the video, played to inspirational background music, is Korea’s preparations for the Winter Games with scenes of excavation, architectural drawings and snowbound views of the sky jump venue, Jeongseon Alpine centre, Alpensia sliding centre and the hockey arena. Perhaps it is the juxtaposition of the picturesque scenery of snow and skiing in the heat of Korea’s summer that catches the passenger’s attention, but I am reminded of the gauntlet of pre-Olympic pressures that countries must endure as they prepare to host the world.

This will be South Korea’s second Olympics, its first hosting of the Winter Games and only the third time that the Winter Games will be hosted in Asia (Japan hosted two previous Winter Olympics in Nagano and Sapporo). This is undeniably a huge honor for Korea. The Games carries a universal cache that bestows upon these special cities ownership of their Olympic years: Berlin 1936, Los Angeles 1984, Beijing 2008, Seoul 1988. Countries spend billions of dollars over six years of preparation to host the world and benchmark the nation’s status.

But the pressures that come with this privilege are real and unavoidable. Host countries strive to be recognized for setting new standards with each Games. Beijing 2008 boasted some of the most ultra-modern sports facilities in Olympic history. After Sydney 2000, some sports writers claimed that the Summer Games should permanently stay in Australia given how well they were run. They did not render the same compliment after the Summer Games in Atlanta.

The Pyeongchang video clearly conveys the message that Korea will also seek to set new standards of technology, hospitality and efficiency for athletes and spectators in 2018, but organizers and advertisers would do well to remember the pre-Olympic difficulties they will endure. Some of these come from the natural hiccups that come with any preparation, but some of these are political, and some manufactured by the news cycle. Having written a book on sports and Asia (Beyond the Final Score: The Politics of Sport in Asia, 2008), I am able to outline some of the things Koreans need to expect.

The first element of the pre-Olympic gauntlet is political. Hosting the Olympics is like having a big magnifying glass on the country that seeks to reveal every blemish and imperfection. Recall the Western press stories during the Seoul 1988 Games on how Korean cuisine included dog meat, shocking to most Americans, or the plethora of activism to boycott the Beijing Games because of human rights abuses, China’s policies in Sudan and labor abuses. The point is that as we get closer to 2018, the media cycle demands stories about the Games and politics becomes a natural supplier. In advance of Pyeongchang, these stories will be much less severe than those before Seoul 1988, when major newspapers reported about the threat of martial law in response to the democratization demonstrations in summer of 1987. But there will be some critical of Korea, perhaps related to North Korea or domestic politics.

The second gauntlet is about preparation. The media will invariably write stories about the logistics of the Games. There are few multi-year projects like a nation preparing for the Olympics. In the demand to “find a story,” media will report about overspending or inefficient spending. They will write that the venues will not be ready in time and that athletes may enter facilities, competing under “Wet Paint” signs. They will write, sadly, about the terrorist threat that has become an unfortunate reality of every Olympics since Munich in 1972.

A third gauntlet is “user-friendliness.” This relates to what spectators should expect to experience when they arrive. These types of critical stories will report that the ticket distribution system is flawed, that there are not enough hotel rooms or that the transport systems to the Olympic venues are subpar. We have seen such stories before every Olympics dating from Tokyo in 1964 (when The New York Times wrote about how the hotel beds would be too short for Westerners) to Montreal 1976 to Rio in 2016 (cost overruns) and we will see such stories before Pyeongchang in 2018.

The good news is that Koreans should not grow anxious about the pre-Olympics gauntlet. Rest assured that it is not a conspiracy to ruin Korea’s party in 2018. Once the Games begin and that first athlete steps into the arena for the opening ceremony, all of the politics stops. All of the pre-Olympics critiques stop. And the world focuses solely on the sports, the medal-winning performances and the athletes — which is the way the Olympics should be remembered.


*The author is professor at Georgetown University and Senior Adviser and the Korea Chair at the Center for Strategic and International Studies (CSIS) in Washington, D.C.