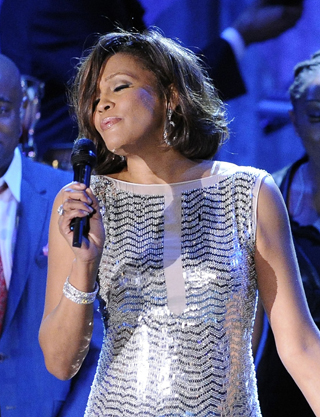 LOS ANGELES - An auction of Whitney Houston’s memorabilia has earned more than $500,000 despite a judge blocking the sale of an Emmy Award won by the late singer.

Heritage Auctions says the top bid in Friday’s auction was $20,000 for a pair of Nike Air Jordan sneakers given to Houston by NBA great Michael Jordan. A Dolce & Gabbana fur coat worn by Houston on stage sold for more than $16,000. The auction featured several costumes worn by Houston, as well gold records and other items the Grammy-winning singer accumulated before her death in 2012 at age 48.

U.S. District Judge Percy Anderson on Thursday blocked Heritage Auctions from selling Houston’s 1986 Emmy trophy, which she won in 1986 for her performance of “Saving All My Love for You” during the Grammy ceremony.

Anderson’s ruling says the Academy of Television Arts & Sciences has initially shown it owns the award, is likely to win the case and would suffer irreparable harm if the award was sold. He set a hearing for July 7 to extend the order.