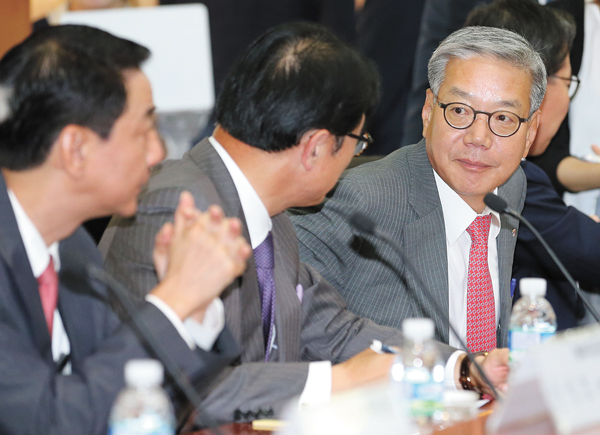 The impact of the so-called Brexit has been less than many feared last week, but Korea Financial Investment Association Chairman Hwang Young-key nevertheless cautioned traders and investors to be prudent.

“Most of the markets expected the U.K. to remain in the European Union, so the shock from the decision is inevitable,” Hwang said. “But there is no need to stir up the markets with excessive anxiety.”

Hwang met with the CEOs of 22 Korean brokerage firms on Monday at his association’s headquarters in Yeouido, western Seoul, to discuss Brexit’s effects on the local financial market.

“Brexit is a political issue,” Hwang stressed, repeating a comment made Sunday by Korea’s finance minister. “But it’s still possible that volatility in the stock market will increase, so the association will create a task force to monitor the market situation closely.”

He stressed that the economy’s fundamentals are strong and reminded his guests that Korea has the world’s seventh-largest foreign reserves and a 50-month string of monthly current account surpluses.

“There could be several [Brexit] effects popping up here and there, but the local capital market will soon be stabilized if the government and the industry work together,” Hwang said. “As accurate information is important in times like this, I hope you will refrain from competing to put out negative forecasts about stock prices.”

In addition to monitoring the market, Hwang said the association would step up efforts to attract long-term inward investment. It will ask the government to seek larger currency swap lines with the United States and China to stabilize the currency market.

“Equity-linked securities with underlying assets in the Euro Stoxx 50 won’t suffer massive losses if that index doesn’t fall more than 30 percent,” Hwang said. “Communicate with investors because there is still some room before it falls to the break-even point.”

Although Finance Minister Yoo Il-ho had characterized Brexit as a political matter, it is not clear that nerves have calmed around the globe; a British departure from the EU will be the first such exit by a member.

Yoo promised, though, that Seoul could act quickly to keep markets here from unnecessary turmoil, notwithstanding uncertainties that still remain as there hasn’t been a precedent in which an EU member has actually departed. However, Yoo said the government would act swiftly to prevent market turmoil.

After the UK announced that the majority of its voters opted for the EU exit door on Friday, global markets were hammered, and Seoul’s Kospi tumbled more than 3 percent.

It was a nervous weekend for investors until markets reopened Monday, but the Kospi rose a bit from Friday’s close largely thanks to net purchases of institutional investors hunting bargains.