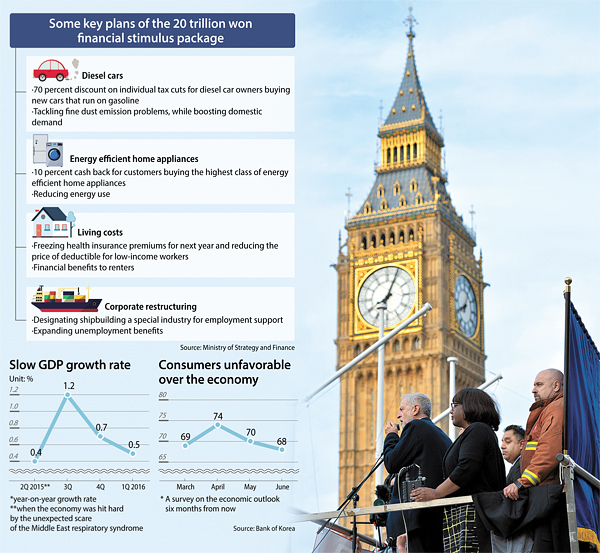 The government announced Tuesday a set of measures to boost the economy as an attempt to meet the new growth rate goal of 2.8 percent for this year, after it lowered its prediction from 3.1 percent the same day.

The government will focus on improving domestic consumption, while also targeting environmental issues such as fine dust emissions and energy use, according to the Ministry of Strategy and Finance.

Consumers who purchase five types of energy-efficient home appliances, including regular and kimchi refrigerators, air conditioners, televisions and air purifiers, will receive 10 percent back from the amount of purchase for three months beginning in July.

This money will be provided from Korea Electric Power Corporation profits.

“The idea of this plan is to give customers a chance to consider buying high-efficiency goods, which are relatively more expensive, by providing them such incentives,” said Lee Ho-seung, director general of policy coordination at the Finance Ministry.

“Crude oil prices continue to be volatile, and Korea is using more and more energy compared to the past. I believe this will have a positive impact in the long run.”

The government is also considering extending individual tax cuts to owners of old diesel vehicles who buy new cars that run on gasoline.

Diesel cars have been criticized as one of the biggest factors contributing to high emissions of fine dust in Korea. Through this initiative, the government is hoping its plan will both reduce emissions and boost the economy.

The Finance Ministry is considering a plan to offer 70 percent off individual consumption taxes for customers who replace their diesel vehicles registered before December 2006. New car buyers can save some 1 million won, depending on the models.

This plan, however, has to be approved by the National Assembly.

According to the Finance Ministry, there will be some 100,000 new cars sold if this plan goes into effect, and the government plans to spend some 90 billion to 100 billion won on incentives.

“We will combine Korea Black Friday and Grand Sale festivals into one event which will last from Sept. 29 to Oct. 31 this year,” Lee said. “This will help attract more foreign tourists and boost consumption.”

The ministry also said it is reviewing ways to revise the holiday system.

Currently, most Korean holidays are celebrated by date, while other developed countries such as the United States specify holidays to fall on certain days of the week like Thanksgiving, which is the fourth Thursday of November.

“However, there are some holidays for which the dates are meaningful, and we will ask private experts to review whether it is possible in Korea.”

It is hard for many Koreans to plan their vacations since holidays fall on different days of the week every year. Many argue that they have lost a day to rest when the holiday falls on a weekend. This year’s Hangul Day, for example, is Sunday, Oct. 9.

The government said it will also invest 80 trillion won until 2018 to give financial aid to 11 new industries, such as futuristic cars and robots. It will also grant tax cuts for companies conducting research and development in these areas.

Furthermore, the Finance Ministry devised savings plans for Koreans to save their living expenses.

The government will try to freeze health insurance premiums for the next year and reduce deductibles for low-income earners.

In addition, the government will also consider giving benefits to exiting jeonse contracts, leases with high lump-sum deposits, to places where they would have to pay monthly rents.

Currently, only those who are job seekers or receive workers’ compensation are eligible to receive such benefits, including loans for rent and tax cuts on housing.However, the Finance Ministry said it will extend benefits to anyone making less than 50 million won a year.

To bolster the shipbuilding industry, the government plans to give a special designation for the industry.

Under this designation, businesses can receive more money from the government for employment promotion subsidies, and former employees can receive unemployment benefits extended by 60 days.

The government added that it will operate a number of counseling facilities in Geoje and Ulsan in the South Gyeongsang region to help people find new jobs and provide counseling services on other issues such as financing and starting businesses.

The unemployment rate in South Gyeongsang, which has a regional industry that is mostly ship-related, has risen 1.2 percentage points from the previous year to 3.7 percent in May.