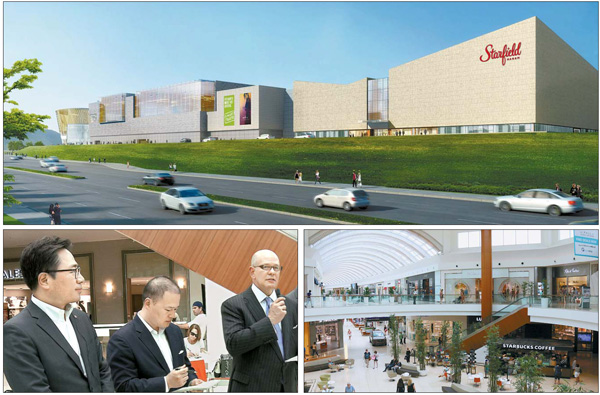 SARASOTA, Florida - Shinsegae Group, the country’s leading retailer, has looked afield to build Starfield Hanam, a megasize multipurpose shopping complex due to open in September, in a partnership with U.S. property developer Taubman.

The 1 trillion won ($850 million) project in Hanam, Gyeonggi, seeks to emulate the Western-style shopping malls that typically occupy wider floor space on a few levels rather than stacking up as many floors as possible, a style often seen in Korean malls.

In the same way as its peers in the U.S. and U.K., the new Hanam property will house central anchor stores including Shinsegae Department Store, E-Mart Traders and Electro Mart in addition to a spa, swimming pool, a sports zone and a movie theater.

The project is overseen by Vice Chairman Chung Yong-jin, who called for a paradigm shift to transform shopping malls into multifunctioning entertainment venues since the price competitiveness of brick-and-mortar department stores and shopping centers has long been overshadowed by e-commerce players.

“The chairman engaged in the project from the beginning phase, citing the project as a new growth engine,” said Lim Young-lock, executive vice president of Shinsegae Property during a media tour of several U.S. shopping malls owned and managed by Taubman Centers.

“The vice chairman paid particular attention to the food and beverage section, from the basic concept to the design,” he said at the Mall at University Town Center in Sarasota, Florida.

The mall was among the models that Shinsegae sought to follow.

Entering the establishment, an expansive high wall with reflective glass bringing in natural light gave off an art gallery-like atmosphere. Throughout the wide hallway filled with plants, there were a few columns so that consumers could have a clear, unhampered view to find shops.

“Light is important because it is important to make people feel good and look good,” said Robert Taubman, president and CEO of Taubman Centers, who led the tour of the mall. “In Hanam, we will also have natural light like this, but with a higher wall than this.”

Still, the CEO stressed that the Hanam mall is unprecedented in its scope as it combines diverse retail and entertainment elements.

“There is no shopping center that is exactly like the Hanam,” Taubman said, “It combines strengths of different malls we have. They have a lot of luxury and also lots of entertainment.”

The complex will contain an assortment of luxury designer brands such as Louis Vuitton, Gucci, and Prada and more wallet-friendly labels such as Uniqlo, Zara and H&M. Lim said that the total number of retail units will be about 750.

Still, the major selling point of Starfield Hanam is a variety of leisure and entertainment spots. The entire space on the top floor in Hanam is devoted to entertainment and leisure. The focal point is an infinity pool that gives a surreal impression that the water stretches endlessly.

An indoor sports center will provide a space for children of shoppers, where they can play basketball and soccer. The food and beverages section on the third floor will also house some 50 restaurants, offering a myriad of dining experiences.

“The Starfield Hanam is not focused on selling more products,” said Lim, the executive vice president. “It is to create a valuable and delightful experience for consumers, and make them visit over and over again to entertain themselves and spend time.”

Chung, the scion of Shinsegae’s founding family, also mapped out a similar vision when he attended a ground-breaking ceremony for Starfield in 2013. He said that the primary competitors of the Hanam mall are theme parks and baseball stadiums, not shopping malls.

The project began as Shinsegae and Taubman Asia, a subsidiary of real estate investment trust Taubman, established a joint venture to build the property in 2013.

The Taubman unit initially held a 30 percent stake, but the portion has increased to its current 49 percent.

Shinsegae Group added a unit called Shinsegae Property to manage the development of the Starfield Hanam. The Hanam mall is the first property under the Starfield brand.

Lim of Shinsegae pinned high hopes on the shopping center, which is slated to open in September.

“I believe that the Starfield Hanam will generate some 1 trillion won in sales in one to two years.”