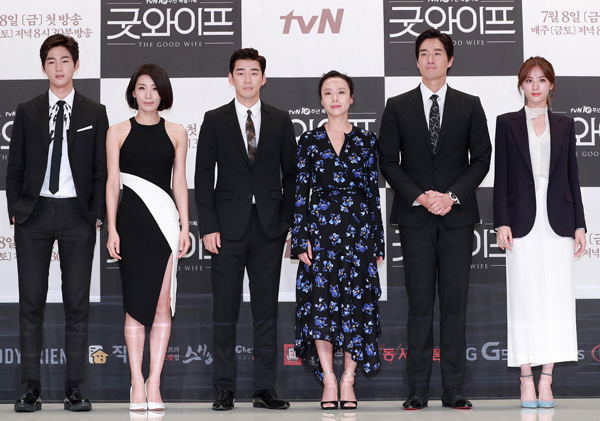 Actress Jeon Do-yeon and actor Yoo Ji-tae will return to the small screen starting on July 8 through a new tvN drama series titled “The Good Wife.”

The upcoming project, a remake of the famous American drama of the same name, revolves around the life of Kim Hye-kyung, played by Jeon, who returns to being a lawyer after 15 years when her husband is suddenly arrested.

Yoo will play the role of Jeon’s fictional husband, a prosecutor who gets arrested over allegations of corruption and involvement in a sex scandal.

Other celebrities, including actors Yoon Kye-sang and Lee Won-keun, actress Kim Seo-hyung and singer-turned-actress Nana from girl group After School, will also star in the upcoming series.

“Choosing who to cast for the drama was not difficult, and I was very lucky because the six characters that we wished to cast all agreed to star in the drama,” director Lee Jung-hyo said.

The upcoming series will be the first in which Jeon has starred in 11 years.

“I decided to take part in the drama because I was mesmerized by the storyline,” Jeon said. “When choosing a new project, I usually focus on the emotions of a character rather than the scenario. However, ‘The Good Wife’ is the first project for which I considered the scenario before the character’s emotions.”

The drama has been receiving attention from the public well before its release because of its star-studded cast.

Jeon was the first Korean actress to win an award at the Cannes Film Festival.