A call to upgrade Korea-U.S. FTA

A call to upgrade Korea-U.S. FTA 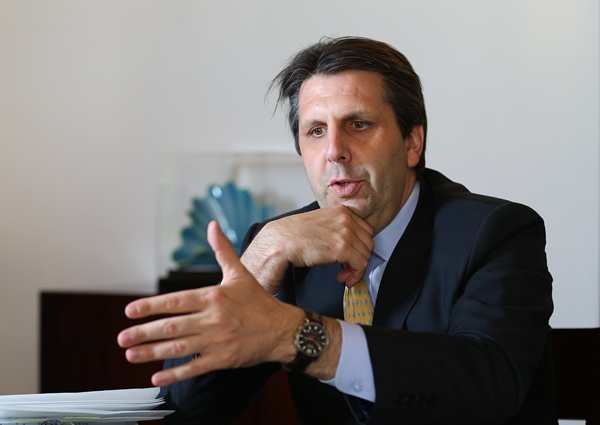 On June 16, the U.S. Embassy in Korea held a rare unofficial briefing session on current issues for the media. It was about the lecture that Ambassador Mark Lippert had given this month.

In the lecture, he demanded “complete execution” of the Korea-U.S. Free Trade Agreement (FTA), such as expanded opening of the legal market and easing of regulations. The remark was intense, and the timing was sensitive. With the U.S. presidential election approaching, some interpreted it as “trade pressure,” and the embassy stepped in to clarify.

There, a U.S. government official said that the ambassador was emphasizing cooperation, not pressuring Korea. However, the meaning of “cooperation” is not so simple. He argued that expanded opening and deregulation will benefit not just the United States but also Korea, as the two countries signed the FTA based on the shared values of an open market, legalism and transparency.

A more direct interpretation of the diplomatic rhetoric is that Korea and the United States are on the same boat called free trade, and Korea must not free-ride on it.

This is the basic idea, and the embassy official enlarged the boundary of cooperation by stressing that the shared values should be spread beyond the region to the world. The U.S. government is looking at the Korea-U.S. FTA not only as a mere bilateral agreement but as a litmus test to prove the validity of free trade domestically and internationally.

Lately, the United States is pursuing ratification of a mega-FTA, the Trans-Pacific Partnership (TPP). But such attempts are being criticized at home and abroad. Republican presidential candidate Donald Trump and his supporters advocate trade protectionism, and the so-called Brexit represents the trend of antiglobalization.

The U.S. government seems to have chosen direct confrontation as a tactic. Washington is pressuring China, risking a trade war, and wants to discourage opposition by promoting faster and more extensive market opening in Korea. Ambassador Lippert’s lecture practically demanded Korea share the “economic protection cost,” so to speak, as Korea was a beneficiary of the Washington Consensus.

And paying a share is becoming reality. Last week, the minister of agriculture, food and rural affairs predicted that the “membership fee” for the TPP that Korea wants to join belatedly would be considerable as he explained the agriculture-related trade policies to the academia and media. “A high level of additional market opening for agricultural products is expected” as a condition to join the TPP, he said.

The ministry, which suffered a great deal when the Korea-U.S. FTA was signed, is given another challenge. Choi Won-mog, a professor and trade law specialist at Ewha Womans University, predicted that Korea would be demanded to upgrade the Korea-U.S. FTA. Korea is highly dependent on exports, and the reality isn’t easy. We cannot afford to underestimate Donald Trump’s candidacy.