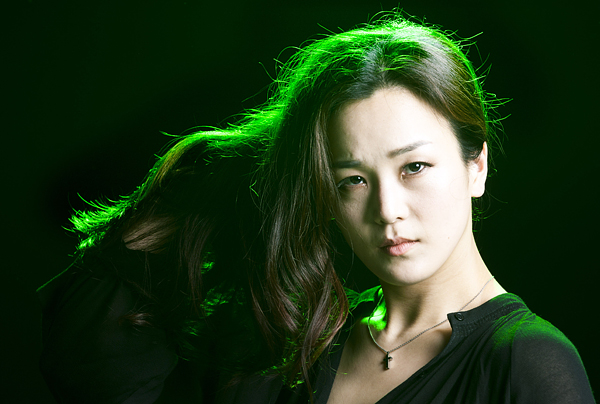 Back in 2013, actress Park Hye-na auditioned for the ensemble in the Korean production of the popular musical “Wicked” but instead landed the leading role of Elphaba. She’s coming back as the green witch for the upcoming production next month at the Seoul Arts Center. [KWON HYUK-JAE]

These days, Park Hye-na is one of Korea’s most in-demand musical theater actresses. But just three years ago, the 34-year-old was a complete unknown.

She got her break in 2013, when she was double-cast alongside former K-pop girl group member Ock Joo-hyun for the role of Elphaba in the Korean production of the hit musical “Wicked.”

At the time, theatergoers were so suspicious of an unknown being able to pull off the challenging role that they simply didn’t go - Ock’s shows sold out, whereas Park’s had empty seats.

But word of Park’s talent began to spread, and soon, hers was the hottest ticket in town. 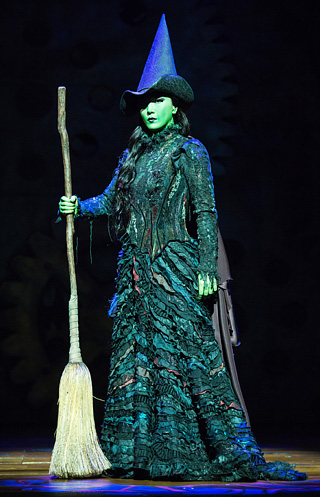 Park will be painted green again this summer for the “Wicked” run scheduled to kick off at the Seoul Arts Center on July 12.

Remembering her first audition for the show in 2013, Park said she had not dared to dream she would land a lead role. Instead, she hoped only for a spot in the ensemble.

In fact, until the Elphaba role in 2013, Park said she half-jokingly told her friends that going to auditions was her “hobby,” attempting to downplay the number of auditions she attended compared to the number of actual parts she landed.

“On the first day of the audition, they asked me if I could dance, so I showed them and that was it,” Park said. “But the next day, they told me to come in and sing one of the main songs.

Then a few days later, they asked me to come in for another audition. There were more dances, more singing… seven different times.”

Park said she began to have hope that she might get a leading role this time. Still, she said she was frustrated that the production team never asked her to read the lines to see her acting until the very end.

Finally, she was given a chance to show everything in front of the show’s director - and then land her first leading role.

The audition process, according to Park, used a new system that gave equal opportunities to both stars and unknown performers.

It benefitted her in 2013, but it also meant that this time around, Park had to undergo the same rigorous auditions.

“I don’t think they were thinking about giving me any advantages for being Elphaba for the last production,” Park said. “I had to start from the very bottom again, and this time, I was even more nervous.”

To hear more about Park’s dramatic transformation as a musical theater actress, the JoongAng Ilbo recently sat down with Park for an interview. Here are some edited excerpts.

Q. Before “Wicked” in 2013, your name was unknown to most people. Now, you’ve become one of the most popular musical theater actresses in Korea. How do you feel?

I don’t think one’s life transforms dramatically just because you did a show that’s popular. In 2013, people around me jumped for joy, and some even came to me in tears, but I was rather calm. I think this kind of characteristic runs in my family. They were calmer than I was. When I told them the news, they were like, “Oh really? Cool… Come home sometime. Let’s have dinner together.”

“Wicked” was your first large-scale musical. Before then, you only performed in small theaters. What do you think made you land the role of Elphaba?

That’s correct, I did small, original Korean musicals before “Wicked.” I think what made me get cast as Elphaba was the tone of my voice, which is quite similar to the sound of Elphaba from the original production.

About a week before the opening of “Wicked” in 2013, I went to record a Korean version of the song “Let It Go” from the animated film “Frozen.” Back then, I didn’t know how famous the song was, or how famous it would become. I just went to the studio to earn some money. I just sang like I always do, and the Korean staff sent the recording to The Walt Disney Company to get approval, which was sort of an audition.

To my surprise, I got the job. It was only later that I found out it was Idina Menzel who sang the English version of “Let It Go.” Menzel played Elphaba in the premiere of “Wicked,” and I guess we had some similarities.

So you think your voice being similar to Menzel got you the role?

Well, the American music director told me also that he saw Elphaba in me. Elphaba was discriminated against all her life, but later, she flies high up into the sky. I also sympathize with her. I really wanted to make a name for myself as an actress.

But it didn’t work out as I would have liked for so many years, and I began to blame myself for being not good enough. After so many failed auditions, I thought about scrapping my dreams and becoming a music teacher or just staying in bed for months, hating myself.

After some stormy years, I began to empty my mind and change the way I think. For example, when I didn’t get a role, I began to think it wasn’t because I’m not talented, but because the role isn’t for me.

When I started thinking like that, I was cast as Elphaba.