Ahn steps down as co-chairman of the People’s Party

Ahn steps down as co-chairman of the People’s Party 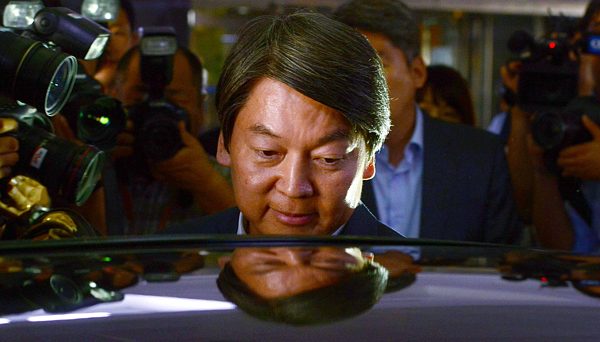 Ahn Cheol-soo leaves the main building of the National Assembly on Wednesday after announcing his resignation as co-chairman of the People’s Party, which he created before the April general election, to take responsibility for a political kickback scandal. [NEWSIS]

Ahn Cheol-soo, a tycoon-turned-lawmaker and a likely presidential candidate, quit his position on Wednesday as co-chairman of the country’s third-largest political party, after its April general election victory was tainted by a campaign kickback scandal.

Rep. Chun Jung-bae, co-chairman of the People’s Party, also stepped down with Rep. Ahn. The decision was announced by the two leaders in a press conference Wednesday afternoon after the party’s Supreme Council held a three-hour meeting.

“We, the two leaders, are stepping down to take responsibility for the latest scandal,” Chun said. “We will sacrifice ourselves for our party and presidential victory.”

Chaos seems unavoidable for the 149-day-old political party. The People’s Party was formally launched by Ahn and his associates on Feb. 2. Promising a new way of doing politics, the party won 38 seats in the April general election to become the third-largest power, ending two decades of a two-party legislative system.

The integrity of the party, however, was challenged after the National Election Commission suspected that its two proportional lawmakers and a senior party official demanded and received kickbacks from advertising agencies in return for hiring them for the campaign.

Reps. Kim Su-min and Park Sun-sook, both key associates of Ahn, and Wang Ju-hyeon, a former deputy secretary general, were questioned by prosecutors. Wang was arrested this week.

Throughout his political career, Ahn has made a series of decisions that were considered political withdrawals, often disappointing his supporters. The first was made in 2011 during a Seoul mayoral by-election, when he endorsed Park Won-soon instead of running himself.

Ahn ran in the 2012 presidential race but quit on the eve of the election and endorsed Moon Jae-in, candidate of the Democratic Party, a predecessor of the main opposition Minjoo Party.

After being outmaneuvered by Moon in negotiations over one of them bowing out, Ahn angrily walked away with a lukewarm endorsement of Moon to unite liberal votes. Moon was narrowly defeated by President Park Geun-hye.

In 2014, Ahn abandoned his first attempt to launch a new political party and joined Moon’s party to create the New Politics Alliance for Democracy. He became its co-chairman, but stepped down from the post later that year after the party suffered a crushing defeat in a by-election.

He left the party completely at the end of last year following a feud with Moon and his faction. After formally launching the People’s Party on Feb. 2, Ahn rejected the Minjoo Party’s proposal for a merger, operated his own campaign and scored a stunning victory in the general election on April 13.

As the campaign kickback scandal tarnished the party’s image, some lawmakers of the People’s Party said earlier this week that the leadership should assume responsibility, a de facto demand for Ahn’s resignation.

Most senior members, however, tried to dissuade Ahn, worrying about the future of the newly-created party without its kingpin.

Earlier Wednesday morning, senior members of the party including Ahn, Chun, floor leader Rep. Park Jie-won and Rep. Park Joo-sun, vice speaker of the National Assembly, held a meeting for three hours to discuss the situation. Ahn insisted he would step down, while other leaders tried to make him stay.

As Ahn persisted, Vice Speaker Park left the room out of protest, saying his resignation was an attempt to avoid hard political realities. That did little to stop Ahn.

“Ahn and Chun are valuable presidential candidates of our party,” Rep. Park, the floor leader, said. “No matter who will head the party temporarily, they should continue to play important roles.”

The People’s Party originally planned a national convention in December to elect a new leadership, but sources said it would be hard to advance the schedule since the young party has not completed the organization of its members nationwide.

Speculation grew that the People’s Party may be headed by the floor leader, but Park denied the possibility.

“The party’s constitution and regulations bar the floor leader from chairing the party,” he said. “The Supreme Council will hold a meeting to discuss the future, whether we need an emergency interim leadership or not.”

According to the party’s constitution, the party should hold a leadership election within two months, if there is a vacuum, to elect a new chairman and members of the Supreme Council. Until then, a Supreme Council member named by the council will perform the chairman’s duties, but the floor leader is not allowed to do so.