Saenuri bans hiring of relatives to fend off hypocrisy charges

Saenuri bans hiring of relatives to fend off hypocrisy charges 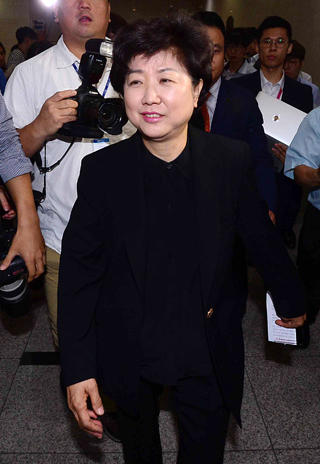 Rep. Park In-sook of the Saenuri Party leaves the press room of the National Assembly on Wednesday after a press conference in which she issued an apology for hiring close relatives to her office. [NEWSIS]

The Saenuri Party decided to ban lawmakers from hiring relatives in their offices after being criticized for hypocrisy because it attacked the opposition party for the practice despite recent revelations that it, too, was guilty of the same practice.

“The interim leadership banned lawmakers from hiring close relatives in their offices,” Rep. Ji Sang-wuk, spokesman of the party, said Wednesday. The party also plans to make the ban a written internal regulation.

Rep. Park In-sook of the Saenuri Party faced fierce criticism after it was revealed that she had hired her nephew and his wife in her office as an aide and intern. The doctor-turned-lawmaker, who won two terms in Seoul’s Songpa A District, issued Wednesday an apology to the public.

“The public was disappointed and angered recently by an opposition lawmaker who hired her family members in her office,” she said. “And I also created a stir by having hired relatives in my office. I sincerely apologize to the people.”

Admitting that her explanation would be seen as a lame excuse, Park said she later fired both relatives.

Park, a prominent doctor of pediatric cardiology, served on the ethics committee of the Grand National Party, the predecessor of the Saenuri Party, in 2011. She entered politics by running in the general election in 2012. During her first term, she served on the National Assembly’s Special Committee on Ethics from 2012 till 2016. She was reelected to her district in April.

Earlier this week, the Minjoo Party of Korea issued an apology over a similar scandal involving one of its lawmakers, Rep. Seo Young-kyo, who was discovered to have hired her daughter as an intern in her parliamentary office for five months in 2014. She also hired her older brother as the accounting manager of her supporters’ association and her younger brother as a secretary, a fact that was already revealed last year.

The Saenuri Party fiercely attacked its rival, the Minjoo Party, over the case, but faced a similar situation on Wednesday due to Park.

Rep. Chung Jin-suk, Saenuri’s floor leader, said the party will screen all its lawmakers and their employment of aides. “We will tell the people the facts and we will correct everything that needs to be corrected,” he said.

The party leadership also decided to reinforce its ethics code in order to refer a member, investigated on charges of a shameless crime, to the ethics committee. Asked about the details of the “shameless” charge, spokesman Ji replied, “You should use the common sense of the word in our society.”

As the Saenuri Party was marred by the embarrassing scandal, the Minjoo Party issued a pointed criticism. “It’s easy to insult other parties, but it is hard to look upon oneself and reform,” Rep. Woo Sang-ho, floor leader of the Minjoo Party, said Wednesday.

Woo also condemned the Saenuri Party’s silence over the corruption investigation against its senior lawmaker. The National Election Commission asked the prosecution to investigate Rep. Lee Koon-hyon, four-term lawmaker of the Saenuri Party, on charges of receiving illegal political funds.

The election watchdog said Lee took back some of the salaries of his aides from July 2011 till December 2015. The amount totaled 244 million won ($193,052) and is considered illegal political funds, it said.

Lee was reelected to his Tongyeong-Goseong District of South Gyeongsang for the fourth term in April without a vote, as he was the sole candidate. The prosecution raided his local office on June 17.

“If the Saenuri Party’s determination for political reform is genuine,” Woo said, “it must sternly punish these two lawmakers in order to show its will.”