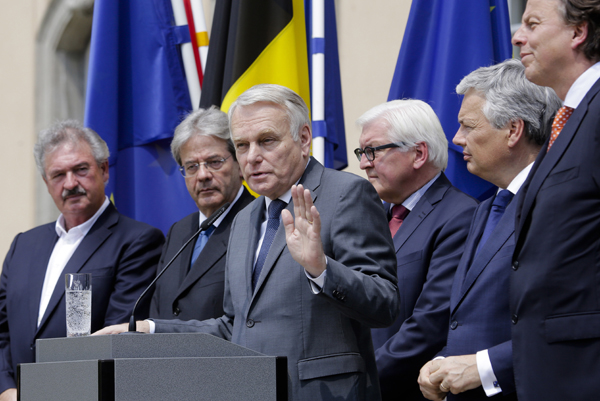 Foreign ministers from the European Union brief the media after a meeting on the so-called Brexit in Berlin last Friday. [AP/NEWSIS]

“Brexit” has the world in a panic. It is criticized as a self-harming, anti-globalization and nationalistic decision. But without a more fundamental and balanced evaluation of the causes and outcomes that led to the vote, we may be prejudiced or respond improperly.

No issue has divided British politics and society like European Union membership. Former Prime Minister John Major, known for his gentle character, harshly criticized three of his cabinet members for interfering with passing the Maastricht Treaty that formed the EU.

The economy was also affected. Brits remember the shameful day of Sept. 16, 1992, when the British government withdrew the pound sterling from the European Exchange Rate Mechanism as the Bank of England failed to prevent devaluation of the currency. In 2000, former Prime Minister Margaret Thatcher expressed her skepticism over the EU, saying, “Most of the problems the world has faced have come from mainland Europe, and the solutions from outside it.”

During Tony Blair’s Labour government, the European Court of Justice banned physical punishment on children in all member countries. While many supported the cause, some British opposed the idea of Europe weighing in on the discipline of their children. Blair said that he had used corporal punishment with his own children but also said the U.K. should stay in the European Union.

Later, when his eldest son, who was a high schooler, was found drunk and lying on the ground in Leicester Square, he lied about his identity to the police. Many Brits opposed Europe’s excessive intervention and argued that if corporal punishment was not allowed, children would be even more undisciplined. When the tunnel connecting England and France was built, many of the British thought that the United Kingdom should keep its distance from Europe.

It is certain that the latest immigration issue affected Brexit. The United Kingdom is not against immigration, but it wants to make its own policy, not follow the EU.

Confidence levels on its economy were also behind the decision. In 1961, the U.K. applied to join the European Economic Community (EEC) because its economic growth was considerably lower than that of continental Europe. Then, French President Charles de Gaulle vetoed U.K. entry to the EEC, and Britain didn’t join the EEC until 1973.

But between 2010 and 2015, the United Kingdom’s average annual economic growth was more than 2 percent, higher than the 1.2 percent average of EU members.

A more fundamental reason is British identity. Two-thirds of British people say that they are simply Britons, not Europeans. The mind-set is significantly different in Germany and France, where only 25 percent and 36 percent identify themselves as German and French.

What will happen to the United Kingdom? In the short term, the economy will be impacted, and the British pound sterling will weaken. The service sector, especially finance, will suffer. However, the long-term loss won’t be significant as long as the United Kingdom remains in the European single market through negotiation.

Because of the mutual benefits, it is unlikely for the EU to completely remove Britain from the single market. While goods and capital move freely, the movement of people is restricted, and the U.K. is not under the jurisdiction of the European Parliament and courts. Switzerland and Norway have shown decent economic outcomes by maintaining close relationships with the EU without being members.

In the long term, the currency to sell is not pound sterling but the euro. Brexit aggravated the uncertainty of the EU’s future rather than the U.K.’s. If the effects of Brexit are not so bad, other countries may follow precedence, especially as the U.K. leaves under good conditions from negotiation. Citizens in other countries may want to consider leaving the EU when complicated issues like helping Greece or refugees arise. Weak links like Greece could fall out of the eurozone. Because of the uncertainties of the EU and the eurozone, a weak euro trend will continue for a while.

Brexit is inspiring the importance of identity. The United Kingdom is geographically in Europe, but the people’s identity is not in Europe.

This has important implications for the reunification of South and North Korea. When the identity binding two Koreas into one weakens, the possibility of reunification fades. If we pursue reunification only to enjoy economic benefits, the future depends on negotiation terms. Why do we want to reunify the peninsula? What do the North Korean people mean to us? Brexit poses the fundamental question before us.