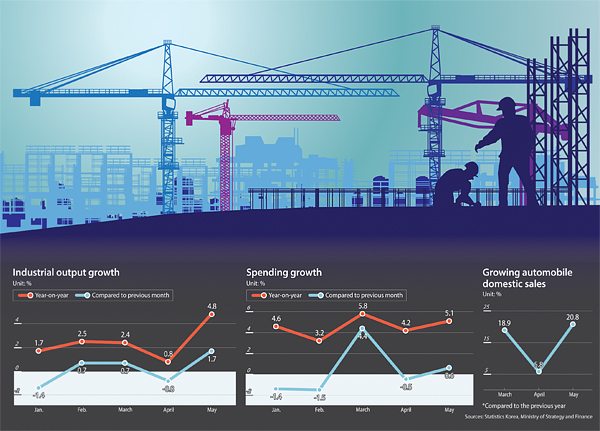 A government report released on Thursday showed signs that the Korean economy is recovering, but the government said the improvement is largely due to the base effect from the sluggish economic situation in the past few months.

Industrial output, which contracted for the second straight month, rose 4.8 percent year on year in May and grew 1.7 percent from the previous year, recording the biggest growth in 15 months, according to Statistics Korea on Thursday.

In the manufacturing sector, the output of telecommunications products fell, while those of semiconductors and automobiles increased.

“It appears that both industrial output and domestic consumption improved due to the base effect,” Yoon In-dae, a director at the Ministry of Strategy and Finance, said on Thursday. “I think the uncertainties from Brexit and the ongoing corporate restructuring in Korea might have negative impacts on the labor market and consumer sentiment later on.”

In fact, industrial output has been sluggish this year.

In April, it fell 0.8 percent from the previous month and rose 0.1 percent in the first quarter compared to the same period last year.

The Ministry of Strategy and Finance said construction investment is increasing as the local housing industry is revitalizing.

“Consumption rose due to the government’s decisions to designate the following day of Children’s Day as a temporary holiday and to extend the individual consumption tax cut for automobiles until June,” Yoon at the Finance Ministry said.

Exports in May also decreased 6 percent compared to the previous year.

“The government will push the financial stimulus package, including a supplementary budget, in order to boost the local economy while managing various risks in exports and the labor market,” the Finance Ministry said.

On Tuesday, the government released a 20 trillion won ($17 billion) financial stimulus package including a 10 trillion won supplementary budget as an attempt to meet the new economic growth rate goal of 2.8 percent this year. It lowered its prediction from 3.1 percent the same day.