Shooting ourselves in the parachute

Shooting ourselves in the parachute 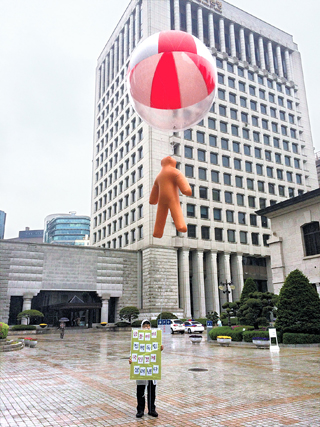 Brexit is an event against expectations. Opinion polls showed a close race, and bookies predicted a 70 percent chance of remaining.

Markets fluctuate when unexpected events occur. In the days following the Brexit decision, the global market was in chaos. It has to brace for a new low-growth era. It is hard to argue with the IMF’s diagnosis that the uncertainty caused by Brexit will discourage consumption and investment and slow down growth. It is unfortunate for the Korean economy, whose foreign dependency is absolute.

What’s really regrettable is the repeated tragedies we cause ourselves. Daewoo Shipbuilding’s fraudulent accounting and slack supervision is such a case. Perhaps the seed of the problem was planted when Hong Ki-taek, a former professor who served as a presidential transition committee member, was appointed as the chairman of the Korea Development Bank.

In April 2013, I interviewed Hong. He openly said that he would strength financing through government policy. “The Korea Development Bank has to help the conglomerates’ liquidity crisis and assist venture companies. We are backed by the government. Just as high risk brings high returns, you have to take risks for a creative economy.” He added that Daewoo Shipbuilding was to be sold.

His appointment was the first decision on a public corporation head by the Park Geun-hye administration. He was “sent” by the Blue House. The first question I asked was about the background of his appointment, and he said, “You are right, I am sent by the administration on a parachute. I will prove myself by my results.” Will he take responsibility for what he said?

Arranged appointments hinder proper policy decisions. Public corporations like state-run banks are under the government’s supervision. But when someone that the president sent is made the head, the government influence weakens. The supervisory authorities will be reluctant to be strict; order in the public sector is undermined.

After two economic crises, a currency crisis and a financial crisis, a bad habit of welcoming parachute appointments began. Public corporation executives are happy to have a parachuted head because civil servants won’t interfere with their operations. It’s easy to create positions, hire certain people and enjoy bonus payments. Moral hazards spread around the organization.

That atmosphere prevails in the bureaucracy as well. Civil servants argue that when a well-connected, powerful person becomes the minister, it becomes easier to work, and the minister will defend the ministry against outside influences. Bureaucrats no longer aspire to become a minister someday. They are less eager to discourage the parachuted heads from offering populist policies.

The vice of parachute appointment has deep roots. The apathetic culture and inefficiency of organizations will harm the national economy.