North plays the diplomat to Cuba

North plays the diplomat to Cuba 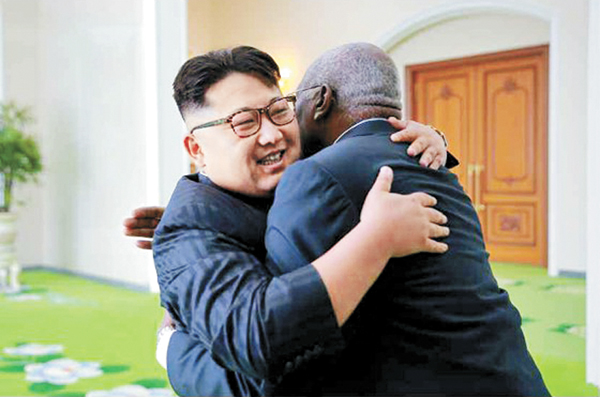 Although North Korean leader Kim Jong-un has generally limited his contact with foreign leaders, evidence suggests he may be moving toward a more actively diplomatic role amid tough international sanctions for its nuclear provocations.

Kim was all smiles as he and Mesa embraced on Thursday, and after taking a commemorative photo, the two held a meeting and then Kim escorted Mesa out the door and vigorously waved goodbye as Mesa’s car pulled away. The footage of the meeting was first broadcast on Friday at 8:30 p.m. and lasted nearly eight minutes.

It is rare for North Korean state media to broadcast a meeting with a foreign delegation just one day after the event; North Korean state media usually takes over a month to broadcast Kim’s diplomatic activities, after heavy editing. The state-run newspaper Rodong Sinmun also carried a huge front-page photo of Kim warmly embracing the Cuban envoy. Also, during the meeting, Kim had only an interpreter by his side. This is the first time Kim Jong-un is seen to have met a foreign guest without an aide by his side, a move apparently intended to show that Kim is capable of handling diplomatic affairs on his own.

During the meeting, Kim emphasized the strong relationship between the two countries, while Mesa highlighted their long history, which dates back to Kim Il Sung and Fidel Castro.

Since taking office in December 2011, Kim has avoided traveling overseas and has only met with a handful of foreign officials who visited Pyongyang including Wang Jiarui, a senior Chinese diplomat, in August 2012; Abdullah al-Ahmar, assistant secretary general of the Syrian Arab Socialist Ba’ath Party, in July 2013; Chinese Vice President Li Yuanchao in July 2013; Cuban First Vice President Miguel Diaz-Canel Bermudez in September 2015; and Liu Yunshan, the fifth-ranking official of the Chinese Communist Party, in October 2015.

Kim also invited to Pyongyang Kenji Fujimoto, the late Kim Jong-il’s former Japanese sushi chef, and former American NBA star Dennis Rodman. Kim did not meet with the first state leader to visit the country since he took office, Mongolian President Tsakhia Elbegdorj, who made a trip to North Korea in October 2013. During his trip, the Mongolian leader gave a lecture at Kim Il Sung University criticizing the repression of human rights.

His friendliness toward the Cuban envoy is therefore a considerable departure from his previous diplomatic tendencies.

A South Korean government official has observed that this could be viewed as part of efforts by North Korea to mend diplomatic bridges after the enactment of international sanctions for its fourth nuclear test.

“North Korea making exerting such effort reflects its anxiety,” the official said, “Because in reality, many countries are halting high-level cooperation with Pyongyang.”

“By recently getting rid of its National Defense Commission [previously the most powerful governing organ] and replacing it with the Commission on State Affairs, Pyongyang is trying to appear like a normalized national system,” said a South Korean Ministry of Foreign Affairs official. “But as long as its attitude toward nuclear weapons remains unchanged, Kim Jong-un will not be able to conduct normal diplomatic relations and instead, Ri Su-yong, a vice chairman of the North Korean Workers’ Party, or Foreign Minister Ri Yong-ho, will be sent overseas.”

Cuba has consistently remained North Korea’s international ally for over half a century. But last year, the United States and Cuba resumed diplomatic relations, which were severed in 1961. And in early June, Foreign Minister Yun Byung-se made a two-day visit to Havana in a move to build bilateral ties with the country, the first for a South Korean envoy. Thus, the establishment of official bilateral relations between Seoul and Havana may not be too far off.