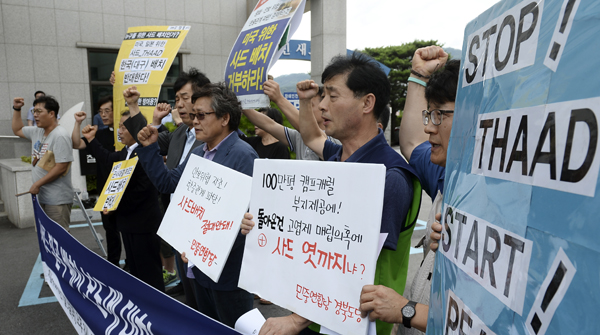 Residents of Chilgok County in North Gyeongsang stage a rally in front of the county office on Tuesday to oppose the deployment of a Thaad battery in Chilgok. Several local newspapers recently reported Chilgok was on a shortlist to be home to the anti-missile system. [NEWSIS]

“The people of the county are perturbed by rumors spreading that Chilgok County is one of the possible sites to deploy the Thaad,” the county said in the statement. “Along with the people, we strongly oppose the deployment of the Thaad.”

Chilgok, with a population of 130,000 people, has been frequently named in the media as a possible location for a Thaad battery if Korea decides to accept it over the serious objections of China and Russia.

The Chilgok County council said in the statement that the people had concerns about electromagnetic waves emitted from the Thaad system.

There are mixed feelings in political parties and among lawmakers over the Thaad system being used in Korea as seen in a recent survey conducted by the JoongAng Ilbo and Korean Political Science Association.

In the survey, 217 lawmakers of the newly elected National Assembly from the Saenuri, Minjoo and People’s parties, were asked their opinions on whether the Thaad system should be deployed, among other foreign affairs and security related questions.

Most lawmakers of the ruling Saenuri Party polled, or 84.8 percent, said that Thaad should be deployed with measures to assuage China. Those respondents included former Saenuri chairman Kim Moo-sung and Na Kyung-won, former chair of the National Assembly Foreign Affairs Committee.

Just 10.9 percent, or 10 Saenuri lawmakers, said the Thaad battery must be deployed, including recently reinstated lawmaker Yoo Seong-min, Kim Jin-tae and Lee Eun-jae. A mere 3.3 percent said that without China’s consent, Thaad should not be deployed in Korea.

Saenuri Rep. Lee Jong-koo, a third-term lawmaker who is against the deployment of Thaad, told the JoongAng Ilbo over phone, “My position is that North and South Korea should not engage in an arms race. I am opposed to the increase of any weapons on the Korean Peninsula, which of course includes nuclear and missile weapons.”

In contrast, 50 lawmakers of the main opposition Minjoo Party surveyed, or 58.8 percent, said that as long as China doesn’t consent to it, the Thaad system should not be deployed. This includes six-term lawmaker Moon Hee-sang and Lee Jong-kul of the National Assembly’s Defense Committee.

Within the Minjoo Party, nearly a quarter, or 24.7 percent of lawmakers polled, were for the Thaad system being deployed here with measures to assuage China. Not a single Minjoo lawmaker voted that the Thaad battery must be deployed, while 13 lawmakers including Ki Dong-min and Kim Kyung-hyup were against the deployment of Thaad at all.

With the minor opposition People’s Party, 45.5 percent, or 15 lawmakers were for the deployment of Thaad with measures to assuage China. This included four-term Rep. Park Joo-sun and Rep. Lee Sang-don.

A Thaad missile defense unit comes with a powerful radar system that can cover more than 1,000 kilometers (621 miles), and Korea’s neighbors, particularly China and Russia, have expressed concerns that the radar could be used as a possible method of surveillance against them.

Following North Korea’s fourth nuclear test in January and a long-range missile launch in February, South Korea and the United States said they would officially begin discussions on the U.S. Forces Korea’s placement of the Thaad system here. Before, Seoul insisted on using its own indigenous Korea Air and Missile Defense (KAMD) system.

Last week, Minister of National Defense Han Min-koo told the National Assembly’s Defense Committee that the results of the bilateral talks are expected to be announced within this year. The Defense Ministry denies that any decision has been made on the issue.

Jeong Hoi-ok, a professor of political science and diplomacy at Myongji University, said, “The ruling and opposition parties may have different points of emphasis but share a similarity in the notion that humanitarian aid to North Korea needs to be used as a means of opening up North Korea. While the ruling and opposition parties have been deeply pitted against each other over foreign affairs and security policies, there is some reaching of a middle ground.”