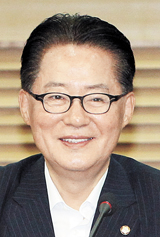 Park is taking the helm of the country’s third largest party, which commands the loyalty of 38 lawmakers, came as the party reels from the kickback scandal implicating two of its lawmakers and a former senior party official.

A 12-member emergency committee, including Park, will steer the party for the next eight months before it hosts a party convention to elect a new leadership.

The composition of the 12-member panel illustrates Park’s pursuit of balanced regional appointments as only four hail from the Jeolla region, a traditional stronghold for the opposition bloc. 23 of the People’s Party lawmakers, or 60 percent, represent Jeolla districts.

Four of the members are from the Jeolla region and three are from Seoul and the capital area. Two are from Chungcheong and two from North Gyeongsang, and one is from South Gyeongsang.

Of the 12 committee members, six are sitting lawmakers while the other half are not.

During a press briefing Wednesday, Park, a four-term lawmaker, made clear he focused on regional diversity for the committee members to signify that the party does not merely represent the interest of the Jeolla region.

“Some lawmakers from Jeolla told me the party should rid itself of Ahn Cheol-soo elements and form a party structure embedded with Jeolla elements,” said Park.

Had he followed such advice, the party’s fate would certainly have “come to an end,” Park said, as it would fail to expand its appeal to voters outside of Jeolla.

Having served as the chief of staff for late President Kim Dae-jung, who believed in a policy of engagement with North Korea known as the Sunshine Policy, Park also is a believer in engaging with North Korea through dialogue and economic aid.

The People’s Party was founded by software tycoon-turned-lawmaker Ahn Cheol-soo in February after he left the Minjoo Party. Ahn quit the Minjoo after it rejected his demand to hold a national convention to elect a leader in the run-up to the April general election.

The integrity of the People’s Party, however, was challenged after the National Election Commission investigated two proportional lawmakers and a senior party official for demanding kickbacks from advertising agencies in return for hiring them for the campaign.