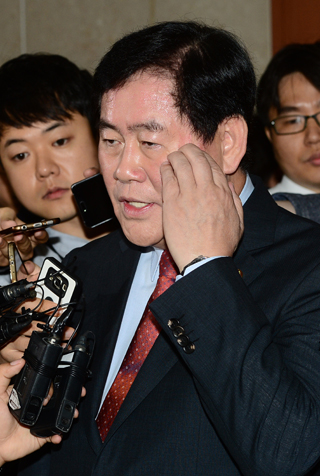 Rep. Choi Kyung-hwan announces on Wednesday he will not run for the chairmanship race of the ruling Saenuri Party. [NEWSIS]

The kingpin of the Saenuri Party’s main faction said Wednesday he will not run in the upcoming chairmanship race, prompting President Park Geun-hye’s political allies to seek a new candidate and strategy to control the largest party in the legislature.

Ending weeks of speculation, Rep. Choi Kyung-hwan, former deputy prime minister for the economy and four-term lawmaker, held a press conference in the morning to announce his decision to absent from the chairmanship election scheduled for Aug. 9.

Following the humiliating defeat in the April general election, the ruling party has been led over the past months by an acting chairman and interim leadership.

The Saenuri Party only won 122 seats in the 300-member legislature, but it recently restored its status as the largest party by inviting back seven independent lawmakers, mostly political enemies of the president, amid the continuing intra-party factional schism.

After apologizing to Saenuri supporters for the election defeat, Choi said he felt extremely hurt by suggestions that he had controlled the nomination process and that he was trying to decide the rules of the leadership election for his own benefit.

“I have many things I want to say,” re remarked, “but I will just bury them in my heart.”

He added, “If the party were to survive should I die, if the Park administration were to succeed and if the party were to win the next presidential election, I would die for it a hundred times. There should be no more infighting after I declare my decision not to run for the chairmanship today.”

Alarmed by Choi’s decision, Park loyalists tried to persuade Rep. Suh Chung-won, the 73-year-old eight-term lawmaker, to run. Suh, nicknamed the “faction’s eldest brother,” earlier said he would not run, although this remains to be seen.

From the Park faction, Reps. Lee Ju-young, Hong Moon-jong and Lee Jung-hyun are preparing their bids, while Reps. Choung Byoung-gug and Kim Yong-tae are preparing runs for the rival faction.

Concerns are high among Park loyalists that Choung and Kim will consolidate their candidacies while the Park faction will produce multiple contenders. Kim, a young reformist, has already said he is open to the possibility of consolidation.

Choi, in fact, talked about these concerns in his press conference.

“I want to sacrifice myself to kindle a light and I hope more lights will be kindled after today,” he said, pressuring other Park loyalists to drop out of the race.

Although Park loyalists are the most powerful faction, their attempts to control the ruling party have not been so successful.

After Park took the office in February 2013, the party held its first chairmanship election in July 2014 and Kim Moo-sung, not a loyalist to the president, won. Suh finished in second place. Kim resigned from the chairmanship after the April election defeat.

The party held several floor leadership races and Park loyalists won some of them. Choi won the post in May 2013 and Rep. Lee One-koo was named to the post without an election in May 2014. Lee was appointed as the prime minister in February 2015 but stepped down after a corruption scandal.

Rep. Yoo Seong-min, a high-profile political enemy of Park, won the February 2015 floor leadership race. But he was forced out of the post in July 2015 after a public feud with Park.

Rep. Won Yoo-chul, a Park loyalist, was appointed to succeed Yoo without an election.

In May 2016, the party held another floor leadership election and Rep. Chung Jin-suk, a centrist, won the post.

The Saenuri Party formally launched the election management commission in the morning to prepare for the national convention on Aug. 9. Former National Assembly Speaker Park Kwan-yong was named chairman of the party’s election watchdog.

The party also held an assembly of its lawmakers in the afternoon to discuss the rules of the election.