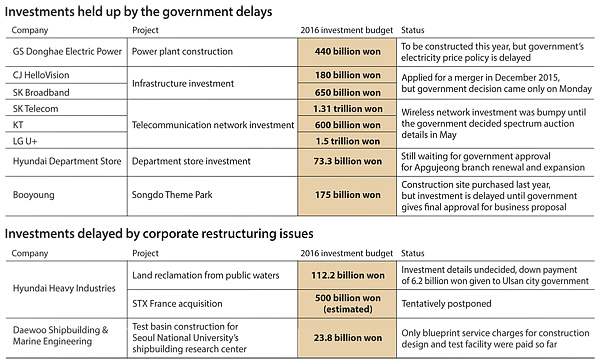 The nation’s 30 largest conglomerates have fallen short in their investment plans. The global economic slowdown, coupled with the government’s delayed decisions on corporate policies, has contributed to the companies’ inaction.

Early this year, the conglomerates announced through the Federation of Korean Industries their plans for 42 investment projects. However, surveys conducted by the JoongAng Ilbo on 39 projects whose investment records were traceable showed that some 8.9 trillion won ($7.65 billion) has been invested in the first half of this year, which is only 29.8 percent of the initial total yearly budget and 59.8 percent of the half-year goal.

It also seems unlikely that their target will be reached by the end of the year, with the major corporate restructuring problems that surfaced following April’s general election. China, Korea’s major importer, still staggers to recover its economy. Government decisions that fall far behind the companies’ schedules are stalling investment plans as well.

In the case of GS Donghae Electric Power’s thermal power plant in Bukpyeong, Gangwon, which is the nation’s first such plant to be owned by the private sector, all generators were supposed to be operated before June. Yet the government still has not decided the final price of electricity for this plant, and investment is delayed.

Other private investments on power plants propelled by SK Gas-owned Dangjin Eco Power and POSPower, POSCO Energy’s subsidiary, also face the same problem. Private power stations are funded through loans based on projected cash flows or profitability. But the government has not released the pricing details yet, and the banks are unable to calculate future sustainability to hand out loans. The estimated long-term investment goal of these companies was a whopping 18.8 trillion won.

Communication enterprises like SK Broadband and CJ HelloVision had to postpone investments worth hundreds of billions of won, because the government took seven months to announce its decision on the M&A proposal the two companies submitted in December. It was rejected earlier on Monday, and this is not even the final verdict.

Telecommunication companies also say that it was hard to make investment decisions in the first half of this year because the spectrum auction was held in May. Full-scale infrastructure investments are only possible after each company receives spectrum allocation. SK Telecom, KT and LG U+ had planned 3.41 trillion won investment for the first half year.

“Every minute and second matter for domestic companies when making investment decisions,” said Bae Sang-kun of Korea Research Economic Institute. “They have to compete with other global enterprises, and their investment plans can even be scrapped if the government takes too much time to grant authorization.”

The government rolled out additional supplementary budgets for two straight years to combat domestic economic recession. But according to some critics, had these major investment projects progressed as planned, there would have been no need for such backup plan.

President Park Geun-hye had also asked government departments at the state-affair seminar in the beginning of the year to create a comfortable environment for corporate investments, but those at the front-line still aren’t spurred to action.

The FKI said that 27 legislation bills proposed by the 20th National Assembly are impeding corporate investments, such as restricting operating hours. Former Minister of Finance and Economy Kang Bong-kyun said, “The nation’s companies are struggling to survive, yet the legislature is imposing even stricter restrictions against them.”

Tax law reforms are adding to the corporations’ reluctance to invest. A 10 percent tax exemption for conglomerates’ facilities investment was abolished last year, and tax deduction for research and development investments were also brought down from the previous 3-6 percent to 2-3 percent this year. Incentives previously given to job-creating companies were also scratched.