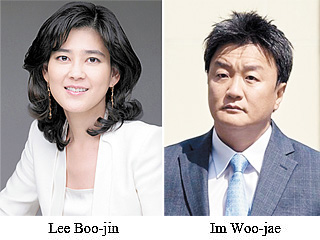 The former vice president of Samsung Electro-Mechanics, Im Woo-jae, has made the highest divorce settlement claim in Korean history, demanding 1.2 trillion won ($1.04 billion) from his ex-wife, Lee Boo-jin, the Samsung heiress and CEO of Hotel Shilla.

Im reportedly filed for divorce with the Seoul Family Court on June 29. In addition to his unprecedented demand, he asked for 10 million won in alimony and custody of their 9-year-old son.

Lee Boo-jin, the eldest daughter of the bedridden Samsung chairman, Lee Kun-hee, applied for a divorce settlement and parental rights with the Suwon District Court in October 2014. She filed for divorce in the summer of 2015 after two rounds of failed settlements with Im, who refused to accept her demands, claiming he wants to keep the family together.

The court granted parental and custodial rights to Lee in January, and Im was given the right to meet with his son once a month from 2 p.m. on a Saturday until 5 p.m. the next day.

Im filed an appeal and a cross-bill to divorce under different terms. The court has yet to rule on the appeal.

Im knew what he was doing when he filed for asset division on June 29. The laws on family litigation procedure changed on July 1, and afterwards the court stamp fee for asset division lawsuits jumped from 10,000 won to around half the fee that a plaintiff needs to pay in any ordinary civil litigation. In Im’s case, this would be about 2.1 billion won.

“Even if Im decides to file more asset division suits,” said the official, “he had filed his original claim before the rules changed, and therefore has no need to pay the stamp fee according to the changed rules.”

The couple’s 17-year marriage was considered a classic Cinderella tale in Korea. Their marriage made headlines in August 1999 as the heiress chose to marry a non-celebrity despite strong opposition from her parents.

To persuade Lee’s relations, Im reportedly visited every member of the Samsung family before tying the knot.

After their marriage, he earned an MBA from MIT and worked at Samsung C&T’s Tokyo branch and Samsung Electronics’ U.S. headquarters. In 2005, he was promoted to a Samsung Electro-Mechanics executive and later became managing director in 2009. Two years later, he was made vice president.

Last December, he was demoted from vice president at Samsung Electro-Mechanics to standing adviser.

Lee Boo-jin has become the second child of Lee Kun-hee to divorce. Lee Jae-yong, the Samsung vice chairman and acting chairman, divorced in 2009. He was married 11 years to Lim Se-ryeong, daughter of Daesang Group’s chairman, who was last year been reported to be in love with actor Lee Jung-jae.