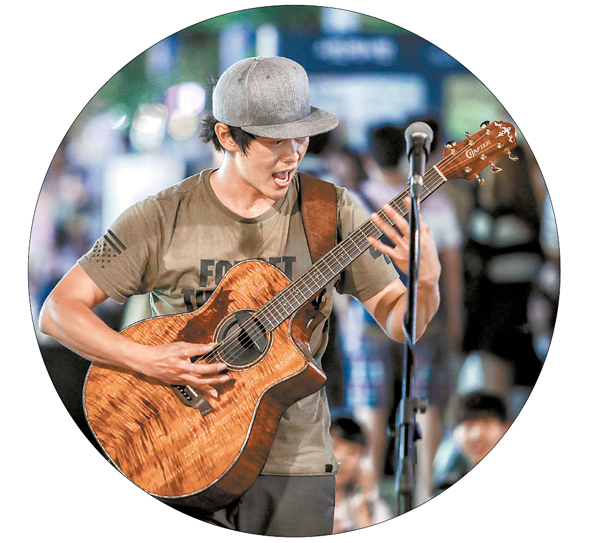 In the world of performance, the streets are the great equalizer.

There’s no lengthy or subjective audition process for a spot on the stage, but there’s also no guarantee of an appreciative audience or steady paycheck.

Still, ask a young street performer - also called a busker - why they do it, and the answer will likely be simple.

It’s an opportunity to do what they love while sharpening their skills in preparation for their shot at the big times. 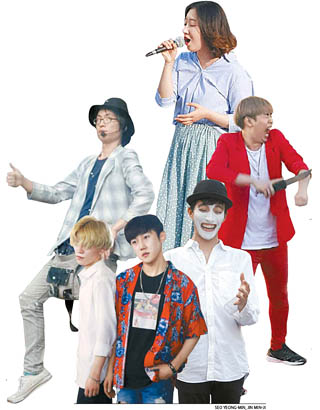 At night in Hongdae, Sinchon and Daehangno, diverse buskers show off unique performances such as dancing, rapping and magic shows that are not easily available elsewhere. [SEO YEONG-MIN, JIN MIN-JI]

Few people can make enough money to live on busking alone, but it has led to big breaks for some young musicians.

Both the male duo 10cm and female singer Yozoh got their start on the streets.

But according to Oh Gwang-seon, a 30-year-old who has been busking for almost two years, performing in public can be more than just a means to an end.

“[It’s] a way for people to interact with each other only using sounds and gestures, and without any prejudice,” he said.

Some of the most popular areas for busking are the Hongdae and Sinchon neighborhoods in western Seoul, as well as the Daehangno area of central Seoul.

The areas feature different kinds of performances that appeal to different demographics.

Buskers in Hongdae and Sinchon usually stage shows that appeal to people in their 20s or 30s, while those in Daehangno focus on an older audience.

At around 6 p.m. one day last week, Jeong Seon-ho stood on a corner playing guitar. By the time the 33- year-old got to his original song “Big Blue Ocean” a crowd of around 100 people had gathered to listen. The audience cheered loudly, waving their hands along to the rhythms of the music.

Jeong used to be a professional soldier, serving as a noncommissioned officer for five years. But he couldn’t throw away his childhood dream of becoming a guitarist, and so six years ago, he hit the streets with his guitar.

At first, Jeong hardly knew what to do. Talent agencies refused to sign him. Although he had no regular income, the guitarist was determined to continue. As time passed, he learned how to attract an audience by developing a unique style: playing the guitar while simultaneously using flashy hand movements.

“In short, busking is a performance that can make something out of nothing,” Jung said. “I wish to make myself known to the public as a musician through busking.”

At another street corner, 29-year-old Lee Se-min was performing a magic show.

“Would you please hold this for me?” Lee asked, waving a white scarf at three people walking by.

They obliged, and when Lee tapped the scarf, it suddenly transformed into a giant ball. More people started to gather, eagerly awaiting the next illusion.

“Gathering the first three people is the most difficult,” Lee said. “But I start strong with my best tricks, and people always stop to see the show.”

Lee fell in love with street magic five years ago when she walked by a performer in Hongdae. At the time, she was majoring in law at a local university.

“Instead of becoming a star magician like Lee Eun-gyeol, I wish to become the kind of magician who can give joy to anyone on the streets,” Lee said. “When I stage performance in front of people who I have never seen in my entire life, I truly feel alive.”

In the streets of Sinchon, performers showed their stuff for university students from nearby Yonsei, Sogang and Ewha Universities.

In 2014, the area’s main drag transformed into a transit mall - a stretch of road where private vehicles are prohibited - and it has bustled with buskers ever since.

Kim Dong-jin, 22, and Ju Hyang-yun, 30, were busily setting up their equipment one night last week.

Although nobody was paying much attention to the duo, they sat down and launched into a series of ballads.

But unlike many other performers, Kim kept his eyes shut the entire time he sang.

“When I begin singing, I close my eyes. I can see nobody in front of me when I start, but when I finish a song and open my eyes, I see a crowd listening to my music. I feel very happy at this moment,” he said.

By the end of their third song, some 20 people had gathered to listen. They continued for four hours, singing 30 tracks.

Standing about 50 meters away from Kim and Ju was a 35-year-old rapper named Mo Seong-hwan, who is a member of the performance collective Happy Delivery.

“I will only sing four songs,” Mo warned before beginning, and by the end, more than 50 people had stopped to hear him perform.

Happy Delivery was started by aspiring comedians Oh Gwang-seon and Lim Gil-su, both 30 years old. It includes a variety of artists like rappers and dancers.

“I want to open an entertainment company using my performers,” Lim said. “I hope that one day, they’ll get enough recognition to debut as artists on the national stage.”

Most of the people who stopped to listen in both Hongdae and Sinchon were in their 20s and 30s.

“I felt highly attracted to [busking] because I could watch musicians perform their songs at a close distance,” said Jang Eun-ha, 20, who returned to Korea in June after living in Dubai for 12 years.

“I think one of the best things about busking is that I can hear new voices that I could not hear elsewhere. I also like the atmosphere in that people can freely enjoy the performance without being concerned about seats.”

Audiences in Daehangno, central Seoul, tend to be on the older side.

On the evening of June 1, Ryu Sung-gook was staging a mime show on a corner of Marronnier Park near Hyehwa Station.

Ryu’s audience consisted largely of people in their 50s to 60s, accompanied by their children and grandchildren.

With a face covered in white paint, Ryu staged his performance barefoot, in front of a small can filled with coins and small bills. It featured a sign that read “If you feel touched.” Accompanied by calm background music, he told a story to the audience without ever speaking a word.

By the end of his show, shouts of “Encore!” could be heard from the impressed crowd.

“Will you do that a second time? I truly thank you for the show. It was amazing,” asked a man in his early 60s after Ryu had finished.

After removing his face paint and lacing his shoes, Ryu told the Korea JoongAng Daily that he has performed on the street for the last eight years.

“I worked as a stage actor for nine years. However, I decided to go out to the streets to meet people from all walks of life because I felt that the number of people I could interact with at a traditional theater was highly limited,” Ryu said.

When asked whether he is satisfied with the state of busking in Korea, Ryu said he was happy with everything but the licensing policies of certain arts organizations.

“I am generally satisfied with how the Korean audience accepts busking because quite a lot of them seem to be willing to pay up to 10,000 won ($9) if they believe the performance was satisfying,” Ryu said. “But I am quite dissatisfied with the licensing system operated by the Seoul Foundation for Arts and Culture (SFAC).”

SFAC grants a few buskers exclusive rights to perform at a street in Cheonggye Stream, central Seoul, according to Ryu.

Although ordinary buskers are allowed to perform in the area, they are banned from accepting money from people appreciative of their show.

“I think this license system is a contradiction to the entire ethos of busking,” Ryu said.