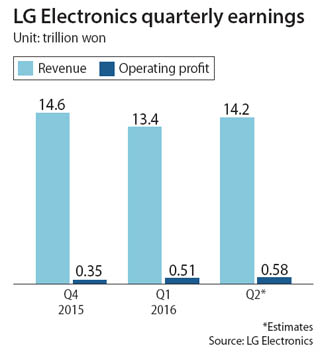 LG Electronics posted an operating profit of 584.6 billion won ($504 million) in the second quarter, up 139.5 percent compared to the previous year, according to a guidance company on Friday.

Operating profit in the April-June period shot up 15.7 percent from the previous quarter. Full second-quarter data will be released later this month.

LG Electronics’s revenue for the second quarter is expected to be 14.17 trillion won, or 4.8 percent higher compared to the previous quarter - and 0.5 percent higher than a year ago.

Operating profit for the first half of this year will be around 1.09 trillion won and this will be the first time in two years that its half-year profit reaches over the 1 trillion-won level.

Industry insiders argued that its home appliances performed better in the second quarter compared with the first quarter. Sales of TVs are expected to have risen due to the upcoming Summer Olympics. Sales of air-conditioners and refrigerators also appear to have improved from the first quarter as temperatures have gotten hotter.

However, LG Electronics’ smartphone sector does not seem to have improved compared to last year. The company’s Mobile Communication Department, which is in charge of smartphone-related business, recorded a 202 billion won loss in the first quarter. Industry insiders estimated that the figure will drop to around 100 billion won in the second quarter.

Meanwhile, shares of LG Electronics fell 0.35 percent to close at 56,200 won on Friday. Samsung Electronics, on the other hand, rose 0.69 percent to 1.46 million won after it reported a preliminary second quarter operating profit of 8.1 trillion won on Thursday.

“Samsung Electronics has recovered as earning rebounded,” said a Samsung analyst on Friday, “but LG Electronics is oversold. The market seems to think the hardware sector lacks potential.”