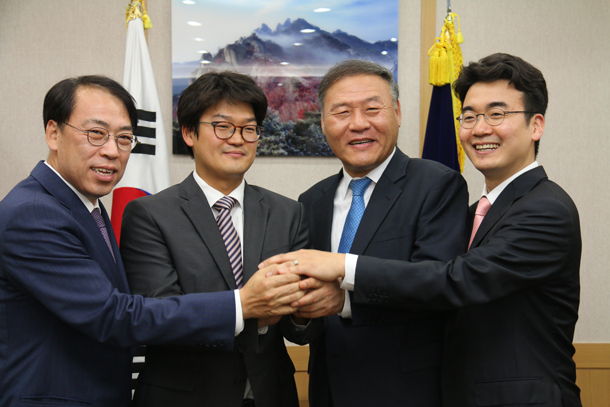 A cyber school designed to reintegrate juvenile delinquents into society held its opening ceremony on Monday in a conference room of the Uijeongbu District Court in Gyeonggi.

“You are special indeed,” reads a banner on the I Wish Campus homepage (www.goiwc.co.kr). In the school, teens who are sentenced to youth detention centers or are on probation can take lectures or download study materials for free.

The web-based school offers a wide range of education programs, including math, Korean and English lectures for students preparing for high school graduation exams. The school also offers classes to help students earn licenses in beauty, foreign languages and various technologies. The teens can continue learning from the school even after they are released from juvenile reform centers.

The catalyst behind the establishment of the school was judge Shin Dong-ju’s passion and affection for juvenile delinquents.

Shin, who has been judging in juvenile courts in the Uijeongbu District Court since February, said, “It’s common for teenagers sentenced to detention centers to quit school and live purposeless lives, and I wanted to provide them with an approachable and affordable form of education.”

Shin began immediately after he started his work in the juvenile court. In March, he began looking for a business that was willing to provide quality educational content free of charge. After talking with multiple companies, Shin found ST Unitas, a company that creates education-related content, and one that shares the judge’s passion for helping youth.

Justice Shin said that ever since 2010, when he became a judge and interacted with other justices from juvenile courts in Chuncheon, Anyang and Suwon district courts, he felt a desperate need to create diverse educational programs for teens who are sent to reform centers. After visiting many juvenile reformatories with other judges and talking with the youngsters, Shin found that they also longed for programs to help them prepare for their qualification exams or earn licenses.

Shin also witnessed the cruel reality of teens who, after being released from reformatories, fell into lives of crime since they could not go back to school or afford to attend private academies. These students, who cannot continue with their studies, therefore struggle economically as they often fail to land decent jobs.

“Justice Shin’s affection for juvenile delinquents is very unusual,” said Kim Sin-yu, another judge from the district court. “The football program was held in the Uijeongbu Sports Complex where Lee Young-pyo, a former member of Korea’s national football team, came to mentor the teens, and that was made possible because of Shin’s efforts.”

Cho Young-chul, the head judge of the district court and the principal of the cyber school, said, “The court will do everything it can to support the passion and effort of judge Shin.”