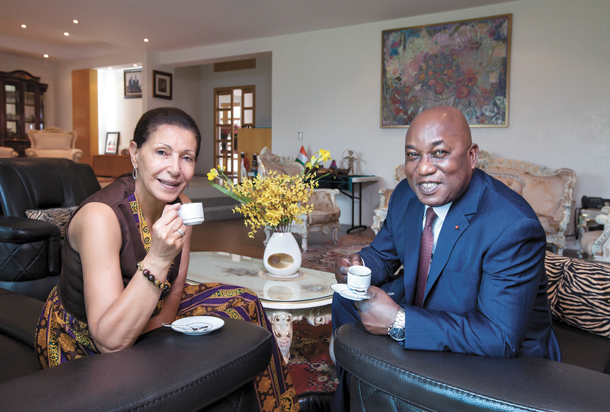 Ivorian Ambassador to Korea Sylvestre Kouassi Bile poses with his wife, Sarah Bile, during a tour of their residence in Yongsan District, central Seoul. [PARK SANG-MOON]

Quitting her job as assistant to the vice president of finance at the African Development Bank, a post she held for 19 years, Sarah Bile, wife of the Ivorian ambassador to Korea, admits the decision was bold but not easy, to say the least.

Traversing across the globe in mid-2014 to join her husband 8,182 miles away, she was unsure of what lay ahead of her in Seoul.

But, Korea has been treating her well, Bile quickly highlights. It’s surprising how freezing the country can get compared to Cote d’Ivoire, and the endless streams of coffee shops, a “differently named establishment every 100 meters (328 feet) you walk,” seem to prove how obsessed the people can get with the drinks, she says.

A. The residence was built in November 1995 near Itaewon-dong and not very far from the Grand Hyatt Hotel. Both my husband and I are very fond of the house mainly due to its vicinity to Itaewon. The whole compound is 46,358 square meters (554 square yards) large, built on a 203-square-meter compound and has an outdoor garden. My husband and I moved into this house in January 2013 and are the first diplomat’s family to live here. It’s spacious and distanced from the noise of traffic and restaurants. On the first floor of the two-story establishment, there’s a large reception hall, dining room, guest room, kitchen and servant’s quarters. On the second floor, our living quarters, there are three bedrooms, two bathrooms and a solarium.

Aside from hosting delegations from our government, who visit every once in a while in groups of 15 people or less, the largest event we usually hold at the residence is the monthly luncheon of 19 African ambassadors stationed in Seoul. Each ambassador takes turn hosting the meeting at their house. Including some diplomats who accompany their ambassadors, 25 to 30 people usually convene for the function.

What’s your favorite object in the house?

We have several paintings made by Korean artist Park Choon-kang, who along with her husband, a former karate teacher for Ivorian police officers, lived in Cote d’Ivoire for a decade. My husband and I knew them back in our country, and when the artist opened a solo exhibition in Seoul in 2012, my husband decided to purchase a few pieces he liked best. I personally have two favorites, one of which represents an African lady carrying a basket on her head while wearing a colorful African dress, titled “Bride” (2007). The other one is a patch-work that illustrates flowers and leaves, called “Secret Garden” (2005), which lights up the living room and offers a warm feeling just by laying eyes on it.

What’s that statue over there?

We call it Awoulaba, which means the “Queen of Beauty” from the Akan ethnic language of Cote d’Ivoire. There’s a unique beauty contest in Cote d’Ivoire called Miss Awoulaba, in which curvy female contestants take part and promote true African beauty through their not-so-skinny body types. It’s held every year and many people enjoy seeing the different body shapes. That sculpture, purchased and brought from my country, represents a typical Awoulaba contestant you could find in the pageant. In Africa, super-thinness isn’t the standard of beauty. I think people rather prefer a bit of a figure; not too much, but a little, normally.

What does a typical house in Cote d’Ivoire look like and how can you compare that with Korean homes?

Houses in Cote d’Ivoire are usually made out of steel and concrete, or masonry. The floor is always covered with decorative tiles, mostly made out of marbles, whereas Korean houses tend to use parquet flooring. In my country, floors don’t have heating systems because the climate is tropical. On the contrary, we have cooling systems. Sometimes, we use air humidifiers to prevent ruining furniture and clothes.

Another key difference is the roof. While Korean houses, especially traditional hanok buildings, have sloped roofs made out of tiles, Ivorian houses have flat roofs. They’re simply built out of masonry or concrete, and this proves efficient for keeping off the heat from the sun. It’s also cheap and easy to build, especially at places where timber is not readily available.

In Cote d’Ivoire, are there any rules of decorum for visiting guests?

To make our guests feel at home, we first offer them homemade delicates as appetizers. We normally serve roasted sweet peanuts or meat rissoles, sauced by ginger or hibiscus juice. Then for the main meal, a variety of our local dishes are prepared, such as attieke (cassava ground into couscous-like grains and eaten with fish or meat), kedjenou (chicken with braised vegetables), alloco (fried banana) served with diced onions, tomatoes and chilies salad.

Afterward, when the guests are ready to leave, they ask the host for permission by saying “I ask for the road,” to which the host would reply “I’ll give you half of the road.” It implies that the host wishes their guest a safe trip back and hopes to see them again.

And I suppose you serve Ivorian coffee here at the residence.

Indeed. Cote d’Ivoire is one of the world’s largest producers of Robusta coffee, which has a very strong aroma due to the large caffeine content. Although there are over 100 coffee species, the two mainly produced types in the world are Robusta coffee and Arabica coffee. Arabica coffee has a milder taste compared to Robusta because of the smaller caffeine content, nearly half.

In Cote d’Ivoire, coffee researchers have been experimenting with making a hybrid version out of these two types of coffee beans, calling it “Arabusta.” They’re not exported yet to Korea; only Robusta beans are. The key difference between Arabusta coffee in Cote d’Ivoire and those from other countries is that we mix them from the stage their growing on trees, whereas others blend them together after they’re picked.

My husband personally think sit will take a good three to four years for this hybrid coffee to enter the Korean market.

Clockwise from bottom left: “Secret Garden” (2005), a patchwork that illustrates flowers and leaves, hangs in the couple’s reception hall. Ambassador Bile personally purchased the piece from a close Korean friend who lived in Cote d’Ivoire for a decade.; Wooden elephant ornaments adorn a corner of the house, offering a glimpse of the African country’s national emblem.; A statue of Awoulaba, the “Queen of Beauty,” exemplifies what an average contestant in Cote d’Ivoire’s unique plus-size beauty contest, Miss Awoulaba, looks like. Sarah Bile claims that, unlike Koreans, women with “a bit of a figure” are deemed as the national standard of beauty in Cote d’Ivoire.; Traditional masks worn by cultural performers are displayed on a table. [PARK SANG-MOON]