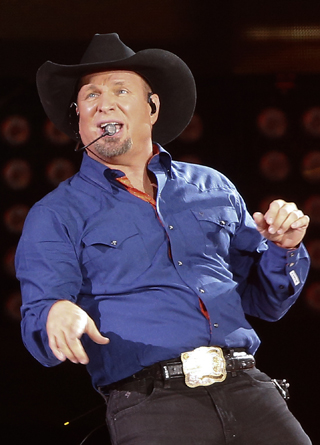 NEW YORK - Garth Brooks entered Yankee Stadium like a school kid on the playground: He ran laps around the venue and yelled loudly as screaming fans cheered on the country music king, who returned to New York on Friday after 19 years.

The feverish audience proudly sported cowboy hats, waved their American flags and even brought homemade signs - something not as popular in New York as it once was - as Brooks ran through his hits with passion and excitement.

He also got serious: Early in the show, he addressed, like many celebrities have, the police shootings of black men in Baton Rouge, Louisiana, and suburban St. Paul, Minnesota, and the deadly sniper attack on police officers in Dallas.

“Everybody’s been asking us if there’s going to be some kind of statement about what happened yesterday down in Dallas. We have the same statement (for) what happened in Orlando down in Florida, or what happened over in Paris at a concert - people, we’ve got to love one another. That’s what it’s all about. That’s our only hope,” he told the audience in the Bronx borough of New York.

The crowd responded by chanting “U.S.A.” and Brooks followed it with “People Loving People” - from his 2014 comeback album - and called the song “the most Garth song we’ll do tonight.” He ended the performance by making a heart symbol with his hands.

Brooks, 54, worked the large stage like a veteran in his black cowboy hat and guitar in hand. In the middle of the show his blue collared shirt was drenched in sweat and at some points after running so much, he sang out of breath, still smiling, and blowing kisses to the concertgoers.

He sang popular songs such as “Unanswered Prayers,” “The Thunder Rolls” and “Two Pina Coladas,” among others.

Brooks last performed in New York in 1997 in Central Park. He will perform a second show at Yankee Stadium on Saturday night. The best-selling singer returned to music after a 13-year break with the album, “Man Against Machine.”