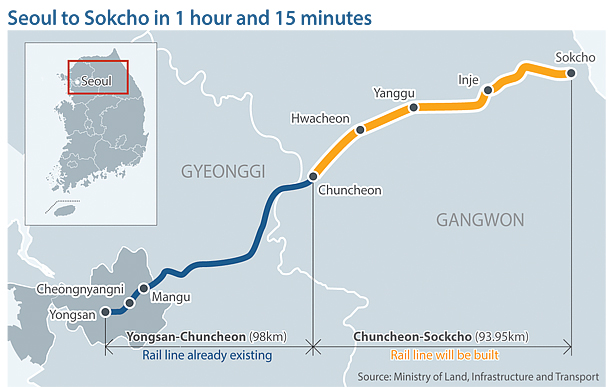 The government announced Monday that it plans to build high-speed rail lines in a 2.06 trillion won ($1.8 billion) project to connect Chuncheon to Sokcho, two big cities in Gangwon.

The Ministry of Land, Infrastructure and Transport said the Ministry of Strategy and Finance and Korea Development Institute (KDI), a state-run think tank, finished the preliminary evaluation for the project and approved the plan on Friday. It took more than two years to approve the project.

“We will try to push forward to start the construction as early as the second half of next year as the project is finally approved,” Ko Yong-seok, a director at the Transport Ministry said. The construction will take about eight years.

When this construction is complete, travel time from Yongsan Station in Seoul to Sokcho will be 1 hour and 15 minutes. The new rail lines will be 93.9 kilometers (58.3 miles) long connecting Chuncheon to Sokcho and will allow trains to travel up to 250 kilometers (155 miles) per hour per hour. The train will stop in three stations between the Chuncheon to Sokcho route at Hwacheon, Yanggu and Inje and is expected to run 36 times a day.

The bus, which currently is the only transportation option available for the routes, takes about 2 hours and 30 minutes.

In fact, Gangwon residents longed for the project for some 30 years, or since 1987 when former President Roh Tae-woo announced the project as one of his campaign promises.

This was the fourth time the project was evaluated as others were found not as cost-effective. The government found the cost was bigger than its foreseen benefits in 2001, 2010 and 2012.

“The current administration has revised some of the projects that would have direct impacts on the local economy to have them get approved such as this railway project since 2013,” said Ko at the Transport Ministry. According to the ministry, they have reduced the total amount of the railway project by 64 billion won to get it approved.

“There are a number of projects such as Chuncheon-Sokcho railway that local people have longed for a long period of time,” said Park at a meeting to discuss trade and investment last week. “These projects can become new growth engines for the local economy when one can find ways to collaborate them with other industries such as tourism and healthcare.”

The Trade Ministry said it will help people to travel from the Seoul metropolitan area to northern Gangwon area and will help companies distributing their goods. Additionally, the Trade Ministry added that it will boost Gangwon’s local economy significantly by attracting more tourists.

The Finance Ministry also approved two other railway projects in the Seoul metropolitan region. One will be 3.5 kilometers long, connecting Ochon Station in Hwaseong, in Gyeonggi, to the major high-speed railway for Seoul to Busan. The travel time from Incheon to Busan will be reduced from 3 hours and 28 minutes to 2 hours and 40 minutes. Another rail line, of 4.7 kilometers, will be built to allow the KTX train to stop at Suwon Station in Gyeonggi. These two projects will cost another 638.7 billion won.