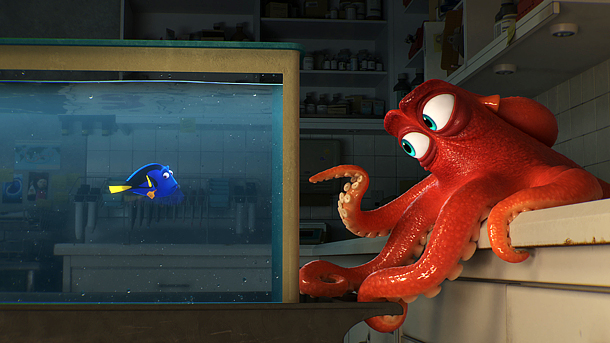 The blue tang fish Dory swept the box office in Korea over the weekend.

“Finding Dory,” the much-awaited sequel to the 2003 hit “Finding Nemo” debuted third on its opening on Wednesday but climbed up the box office over the weekend to the No.1 spot.

The Korean period film “Seondal: The Man Who Sells the River” ranked second.

The caper film set in the Joseon Dynasty (1392-1910) was released the same day as “Finding Dory.” The period film debuted on top at the local box office on opening date but it slipped to second over the weekend.

Featuring Yoo Seung-ho, one of the few actors who made the smooth transition from childhood acting to an adult career, the film is based on Kim Seon-dal, a famous fictional con man who appears in the 19th century Korean novel.

The swindler even tries to sell water from the Daedong River up in the North.

The Korean comedy film “Familyhood” came in third, two steps down from the previous week’s returns.

The Hollywood crime action film “Now You See Me 2” ranked fourth even though the film is not released yet in Korea.

The film is set to release on July 13 but the film already began screening through previews and has sold 197,976 tickets.

Other films that made the top 10 by ticket sales included “The Legend of Tarzan,” “The Conjuring 2,” “Independence Day: Resurgence” and “The Jungle Book.”

“The Inerasable,” a Japanese mystery thriller, ranked ninth, making the list for the first time.