Tax collections up for 2016 but may taper off

Tax collections up for 2016 but may taper off 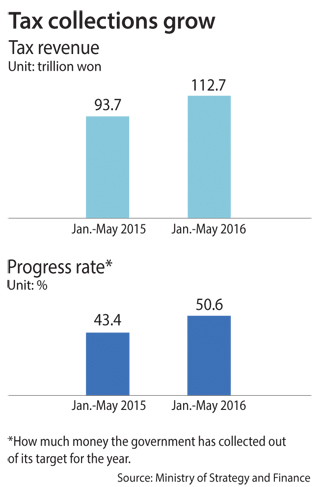 The government collected more tax revenues in the first five months of the year than a year earlier, but warned that domestic and foreign instabilities might take a toll on collections in the second half of the year.

The Ministry of Strategy and Finance said Tuesday it collected 112.7 trillion won ($98 billion) in tax revenues as of the end of May, a 19 trillion won increase year-on-year, 7.2 percentage. The revenues accounted for 50.6 percent of the government’s 2016 target of 222.9 trillion won.

“Companies have become more profitable and private consumption rose compared to the previous year,” said Chang Jung-jin, a director at the Finance Ministry.

The ministry collected 30.2 trillion won in corporate taxes and 28.7 trillion won in value-added taxes from purchases of goods and services. Both figures were 5.5 percent higher than in the same period last year.

Private consumption in the first quarter of 2016 rose 2.2 percent compared to the same period in 2015.

According to the ministry, publicly listed companies reported 63.3 trillion won in operating profit before tax as of the end of last year. That figure was 18.7 percent higher than 53.4 trillion won in 2014.

“The real estate market has been vitalized and average income rose in general,” Chang added.

Income tax collections rose 5.6 percent from the previous year, hitting 30.2 trillion won. Additionally, the Finance Ministry said there were more self-employed people reporting incomes than in the past.

During the first five months of the year, the government earned a total of 179.8 trillion won through both tax and non-tax income. The ministry said it spent some 175.4 trillion won during the same period, recording a surplus of 4.5 trillion won.

The government has spent 45.4 percent of the total budget planned for this year as of May, which is 1.5 percentage points higher than in the previous year. By sector, the government spent 0.7 trillion won for civil servant salaries and 2.4 trillion won more for acquiring new assets.

The rest of the year might not be as positive.

“Domestic factors, such as ongoing corporate restructuring and foreign factors including the United Kingdom leaving the European Union might have a negative impact later this year,” Chang said. “We will monitor these factors closely to minimize the impact.”

Meanwhile, branches of the government submitted their budgets for 2017 and they said they would need 398.1 trillion won next year. That figure is 11.7 trillion won, or 3 percent, more than the budget for 2016.

The Finance Ministry added that 3-percent growth is the lowest in recent years and that ongoing financial reform is having a positive impact.

The government branches said they need more money to spend on education, welfare, culture and defense. They said they plan to reduce spending on agricultural and environmental issues.