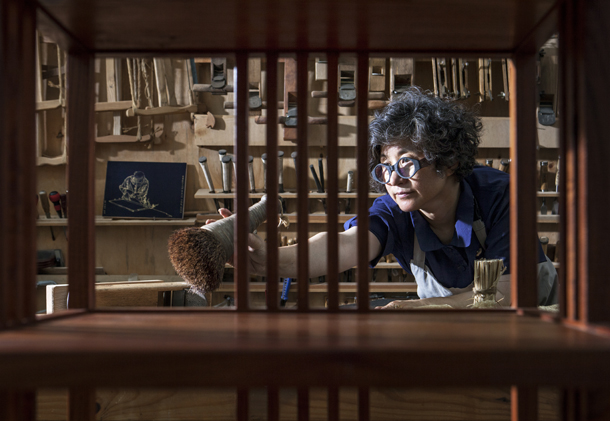 Yoo Jin-kyung, a traditional Korean carpenter known as a somokjang, works on a piece of furniture at her workshop in Gimpo, Gyeonggi. She hopes her furniture will still be widely used a century from now. [PARK SANG-MOON]

The weather is scorching hot, but it’s not much cooler inside Yoo Jin-kyung’s workshop.

The scent of wood fills the air as Yoo labors over a piece of furniture. Its modern design sharply contrasts with the traditional techniques she uses, but as Yoo works, she hopes the piece is modern enough.

After all, she’s trying to make something that people will still use a century from now.

Yoo is a somokjang, or a traditional Korean carpenter. It’s an ancient trade deemed an intangible cultural asset by the government, but unlike many other artisans, Yoo is more focused on the future than the past. 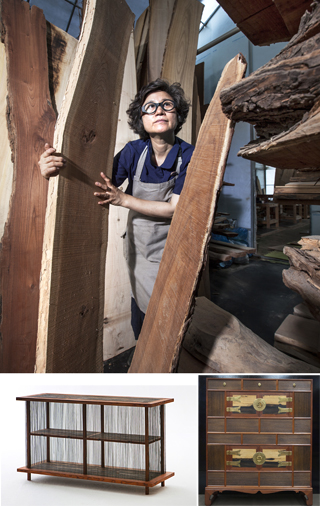 Top: Yoo examines some of the lumber she uses to make furniture. Left: A piece from the “Forest” series, exhibited in the 2016 Triennale International Exhibition in Milan, Italy. Right: A double-chested drawer created by Yoo. [PARK SANG-MOON]

“Although my techniques, materials and tools all originate from traditional methods, I want to make furniture preferred by modern people,” Yoo said. “I am focusing on practical pieces that go well with the contemporary styles of interior design. I don’t want them to simply be placed in the corner of some hanok [traditional Korean home].”

“If my works are considered representative of traditional Korean furniture a century from now, then my life as an artisan can be deemed successful,” she added.

Yoo works out of a renovated vinyl greenhouse in Unyang-dong, Gimpo, Gyeonggi. Inside, piles of lumber twice the height of a normal person stand alongside mechanical saws. Another room is dedicated to boxes of tools.

Yoo stumbled on carpentry in 1997, during the Asian financial crisis. She was unhappy with her job, so she decided to quit and search for something she was truly passionate about.

Yoo began taking classes at a local workshop, where she fell in love with handling wood. She went on to attend more traditional classes provided by the Korean Culture House, affiliated with the Korea Cultural Heritage Foundation.

But it was Park Myeong-bae, a master furniture-maker, who convinced Yoo dedicate herself to the craft. She soon began spending day and night at Park’s side to learn his techniques. Along the way, she obtained technical licenses like Craftsman Wood Handicraft, Craftsman Architectural Carpentering and Craftsman Furniture Making.

Carpentry isn’t easy for a woman of Yoo’s small size. She struggles to pick and stack the large amounts of lumber she uses. Her body is marked with scars, and she now suffers from intense nerve pain known as neuralgia. She is made aware of her physical limits almost daily.

“When I feel my physical limits during my work, I understand how truly tough this work is,” Yoo said.

But in 2007, her craft nearly killed her. After undergoing surgery to repair a finger she’d injured while working, the doctors struggled to wake her up.

Most of her family urged her to quit. But her second son encouraged her to keep working, and with his support, she regained her confidence and kept going.

These days, Yoo is fully recovered and spends most of her time sawing and planing pieces of lumber into works of art. When she watches them prepared to leave the workshop and enter the world, she says she feels as though a new life has been born.

But now, she also works to ensure the future of her craft.

When most traditional artisans pass down their trade, they focus on maintaining original techniques. In Yoo’s classes, however, she works to harmonize tradition with modern design. It’s both a nod to changing times and an attempt to blast open the definition of what traditional furniture can look like.

Until Sept. 12, Yoo’s works from her “Forest” series are exhibited as part of the 2016 Triennale International Exhibition in Milan, Italy. The pieces of furniture are the result of a collaboration with designer Kim Sang-yoon, and are all made from Chinese mahogany and wood from the Empress tree.

All the pieces are functional, as Yoo believes furniture designed only to be beautiful cannot be considered traditional.