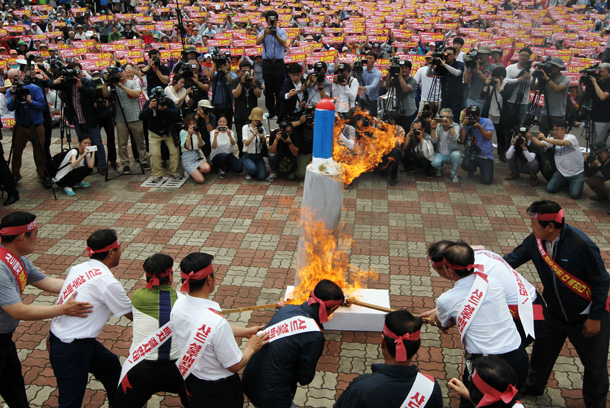 About 5,000 residents of Seongju County, North Gyeongsang, shout slogans to oppose deploying the Terminal High-Altitude Area Defense (Thaad) on Wednesday after the Defense Ministry announced Seongju as the site for Thaad battery deployment. The banners read: “Oppose deploying Thaad.” Leaders of the county also in the rally set fire to a mock-up of North Korea’s long-range ballistic missile Musudan to denounce the missile as the trigger of the Thaad system deployment. [GONG JEONG-SIK]

The rural town of Seongju in North Gyeongsang will be the site for the U.S.-led Terminal High Altitude Area Defense (Thaad) system, the Ministry of National Defense announced Wednesday.

The site was decided based on a joint survey conducted by experts from South Korea and the United States, Yoo Jeh-seung, defense deputy minister for policy, said. Military effectiveness and the safety of local residents were considered in the survey and Seongju was subsequently recommended as the best site. Yoo said defense ministers of the two countries approved the selection.

After a continuing series of nuclear and missile tests by Pyongyang, Seoul and Washington reached a decision to deploy Thaad on Friday. It took only 157 days since North Korea’s long-range missile firing in February for the South and the United States to decide on the deployment of the advanced anti-ballistic missile system and select the site.

The Seoul metropolitan area will not be covered by the Thaad system’s interceptors, which have a range of 200 kilometers (124 miles), but the ministry stressed that the Thaad system in Seongju will protect as much as two-thirds of South Korean territory from the North’s nuclear and missile threats. The ministry added that the South Korea-U.S. combined defense ability to protect the nation’s major infrastructure installations, such as nuclear plants and fuel storages, will also be strengthened. 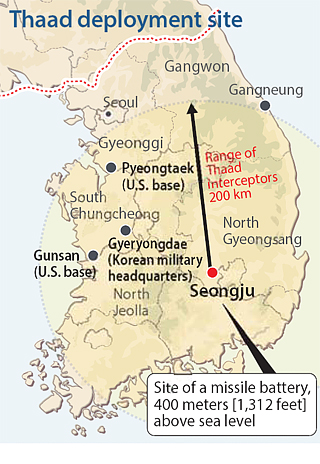 “We make an earnest appeal to the Seongju residents to understand the military’s sincerity in making this decision,” Yoo said.

According to Yoo, the goal will be to complete deployment by the end of next year, but Seoul and Washington will try to advance the schedule.

Seongju is located near the U.S. Forces Korea’s Camp Carroll in North Gyeongsang.

As of now, a South Korean artillery base is located in Seongsan-ri of Seongju County and the ministry plans to relocate the unit and offer the site to the U.S. military to deploy the system.

While South Korea will provide the site and infrastructure, the U.S. military will provide the system and its operating cost. A typical Thaad battery comes with a control center, Army Navy/Transportable Radar Surveillance (AN/TPY-2) radar deployed, six launchers and 48 missiles. One battery is worth up to 1.5 trillion won ($1.3 billion).

The selected site in Seongju is about 240 kilometers from the inter-Korean border, out of the range of North Korea’s newly developed 200-kilometer-range artilleries, soon to be deployed near the border.

“The North’s Scud missiles targeting the capital region fly at a lower altitude of 100 to 200 kilometers and their flight time is short,” Yoo said, explaining why the Thaad defense shield will exclude the Seoul metropolitan area. “Therefore, the Thaad system is limited in stopping them. The Patriot surface-to-air missile system, designed for lower-tier defense, is more appropriate against Scud missiles.”

Because one Thaad battery won’t be enough to cover the entire South Korean territory, the South Korean and U.S. military authorities appear to have decided to place the missile defense shield to protect the Busan, Ulsan and Pohang areas, where supplies and troops will enter Korea in the event of a war.

Major nuclear plants, oil facilities and storages are also located in this region. The war supplies of the U.S. Forces Korea are also near Daegu.

Using the existing Patriot missiles to intercept the North’s mid-range Rodong or Musudan missiles targeting Busan is also impossible, forcing Seoul and Washington to place the Thaad in southeastern region.

The Seongju site also has a lower population than other candidates. Seongju County has a population of 45,000 people and Seongsan-ri has about 2,800 residents.

Over the past months, residents of the candidate sites have expressed opposition, citing health concerns over the electromagnetic radiation emitted by the radar. Their protests were also fueled by the North’s threat of a physical response to the Thaad site.

“The radar of the Thaad system emits electromagnetic waves at angles of 5 to 90 degrees from the ground,” said a military official. “The base in Seongju is located on high ground at an altitude of 393 meters, so we can minimize the concerns. This decision was intended to reduce the impacts on the residents while maximizing military effectiveness.”

The site is also located about 1.5 kilometers from populous villages in Seongju. The Ministry of National Defense cited an environmental assessment report by the U.S. military that says the radar is harmless if people stay at least 100 meters away.

“Because we advanced the announcement schedule, we could not provide enough explanation to Seongju residents,” said a defense official. “We will do our best to explain to them that the Thaad system is safe, and the nearby area will actually be safer from the North’s threats.”

About 200 Seongju residents, however, arrived at the Ministry of National Defense an hour after the announcement. They delivered a protest letter, written with blood, and a statement signed by 25,000 residents to Vice Minister Hwang In-moo.

Selecting a site in the southeastern part of the country is also intended to minimize diplomatic fallout. In addition to North Korea, China and Russia have opposed the deployment of the Thaad system in the South because it comes with a powerful radar that can cover up to 900 kilometers and China and Russia have expressed concerns that the radar could be used as a possible method of American surveillance against them.

When deployed in Seongju, only some parts of China’s Shandong Peninsula and North-China border areas will be covered by the radar. Yet China remains hostile to the project.

Lu also said the deployment of Thaad will seriously disturb the regional strategic balance and strategic security interests of China and other countries in the region.

“It is a move against the efforts to maintain peace and stability on the Korean Peninsula,” he said.

Top security and economic officials defended the decision on Wednesday before the National Assembly.

At a House Steering Committee of the National Assembly, Kim Kyou-hyun, senior foreign affairs and security secretary to President Park Geun-hye, said the president and Chinese President Xi Jinping addressed the Thaad deployment issue in April when they met on the sidelines of the nuclear security summit in Washington.

“China expressed its opposition,” Kim said. “And [Park] delivered our position that the decision will be made for the sake of the security of the country and the people.”

Asked if Park will make additional contact with China over the issue, Kim said, “There is no fixed schedule between the two countries.”

Kim Kwan-jin, chief of the national security office at the Blue House, also called it inappropriate for China to intervene in South Korea’s self-defense, stressing that the Thaad system won’t be needed if the North’s nuclear and missile threats are removed.

“We have always acted confidently to exercise our sovereign right for self-defense measures and we will continue to do so,” he said.