Where are the protests in China?

Where are the protests in China? 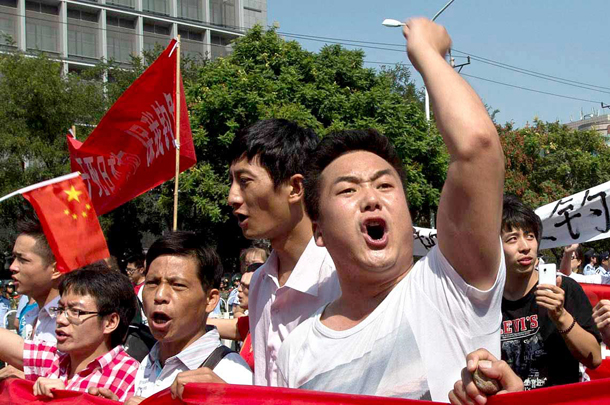 Chinese demonstrators chant slogan as they march past the Japanese Embassy during an anti-Japan protest in Beijing Sept. 16, 2012. The white character on a banner reads “Diaoyu Islands belong to China, Chase away Japan.” [AP/NEWSIS]

Chinese didn’t waste any time venting their anger at The Hague’s ruling against their country’s territorial claims in the South China Sea. Within minutes of the news, Chinese social media was flooded with thousands of comments parroting a testy, often profane nationalism.

What China hasn’t witnessed yet, however, is any semblance of the mass protests that roiled dozens of Chinese cities, sometimes violently, in 2012 after a similar territorial dispute with Japan erupted into the headlines. And the fact is, that’s not likely to change.

Unlike in 2012, Chinese censors almost immediately began deleting the most inflammatory posts about the verdict, such as calls for war in the South China Sea. Authorities also quickly threw up a police cordon around the Philippine embassy in Beijing to thwart any demonstrations.

That hardly means that the Chinese government agrees with the tribunal’s verdict (which it’s denounced as “null and void”), or even that officials are all that squeamish about anti-foreign sentiment. In 1999, following the accidental U.S. bombing of the Chinese embassy in Belgrade, then Chinese Vice-President Hu Jintao explicitly authorized protests outside the U.S. embassy. In 2012, the government initially seemed to be encouraging popular rage against Japan. And as recently as 2014, after a Malaysian Airlines jet carrying 152 Chinese passengers disappeared in the South Pacific, authorities allowed an angry crowd to besiege the Malaysian embassy and demand compensation for the families of victims.

But several things are different about the current nationalist outburst. Earlier protests took place against a backdrop of healthy economic growth. Today, President Xi Jinping, who assumed power weeks after the 2012 protests, manages a country where mass layoffs from previously secure state-owned companies have become common, and where demonstrations over air and water pollution have grown in size and frequency. The last thing the government wants to see is nationalist anger merging with discontent over pocketbook and lifestyle issues. The way anti-Japanese protesters turned against authorities in 2012 — clashing with riot police, destroying government-owned vehicles and attempting to break into government buildings — remains fresh in leaders’ minds.

The current government also has instinctively less tolerance for the open expression of views, however patriotic. Before Xi’s ascent to power, China’s social media had developed into a proverbial town square; discussion flowed freely enough that protests could be and were planned on various platforms. Today, after an extraordinary, years-long crackdown, it’s become a much more circumscribed place.

Where exactly Chinese should focus their fury may also be unclear to many citizens. Few harbor the same hatred for the Philippines as is commonly expressed for Japan, whose brutal World War II occupation of the mainland remains a touchstone for all Chinese. Japan, Asia’s second-largest economy, is also a geopolitical rival in a way the Philippines are not.

For aspiring Chinese protesters, that makes choosing a target — The Hague? International law? The U.S.? — a more complicated exercise.

None of this means that nationalist passions over the South China Sea — which have been deliberately stoked by state media over the last few years — aren’t deep-seated and widespread. But the government seems to have decided that its interests lie in modulating that anger, at least for the moment. With luck, that’ll give Chinese leaders the room to forego a more aggressive response and pursue negotiations with the Philippines and other Southeast Asian nations. The region, no less than China’s streets, could use a bit of calm right now.