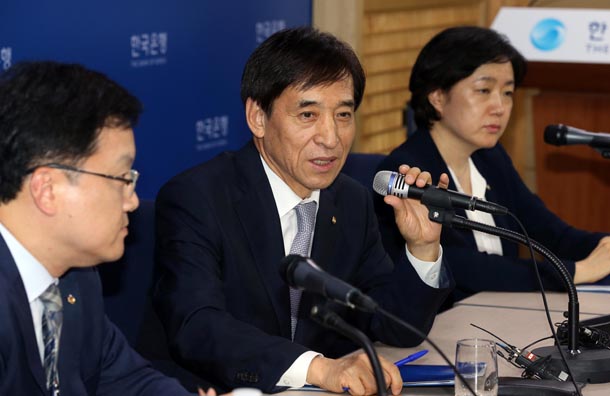 Governor Lee Ju-yeol speaks at a breifing on inflation at the headquarters of the Bank of Korea in central Seoul on Thursday. [NEWSIS]

The Bank of Korea (BOK) cut its 2016 growth forecast for the economy to 2.7 percent from 2.8 percent after it held its benchmark interest rate steady during the monetary policy meeting on Thursday.

The central bank cited the increased uncertainties tied with Britain’s vote to leave the European Union, the possibility of a prolonged global trade slowdown and weak domestic exports as the main factors for lowering the annual gross domestic product (GDP) forecast.

“If the Brexit issue continues to have a prolonged impact on the global market and leads to a global economic slowdown, it could hurt Korea’s economy,” said Governor Lee Ju-yeol. “We factored this in when we revised the growth outlook.”

Lee also noted newly emerging issues such as the government’s decision to deploy the Terminal High Altitude Area Defense (Thaad) system and a new regulation aimed at curbing graft, known as “Kim Young-ran’s law,” are further expected to contract domestic consumption, though it is still hard to gauge what the exact fallout will be. For 2017, the BOK set the forecast at 2.9 percent. 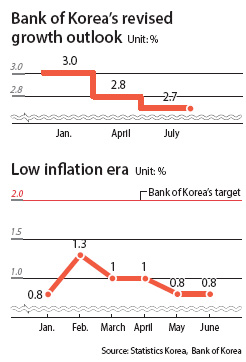 The BOK’s revised outlook follows a series of cuts made by both the government and private economic institutes including Standard Chartered Bank Korea.

Still, the 2.7 percent forecast remains relatively higher than the private entities’ predictions, which fall in the mid 2 percent range, triggering long-held doubt that the BOK’s prediction is often too optimistic.

“We revised the economic outlook because of higher global uncertainty and persistent weakness in both exports and domestic investment,” said Park Chong-hoon, head of Korea economic research at Standard Chartered Bank Korea, who announced the growth projection cut a day before the policy meeting.

The BOK also touched upon another lingering annoyance on Thursday: persistently low inflation.

This is the first time the governor has held such a briefing exclusively on inflation, after the central bank decided last year to give explanations if real inflation figures consistently miss their target inflation of 2 percent for six consecutive months.

The bank’s consumer price index (CPI) stood at 0.8 percent in June and the average CPI between January and June comes in at 0.9 percent.

The prolonged low inflation trend is raising questions about the efficacy of monetary policies in managing inflation. The BOK exercised two rate cuts last year and once last month. But Gov. Lee said it takes time for monetary decisions to exert any tangible effect on consumer prices.

The governor expected the CPI to reach 2 percent in the first half of next year, helped by the recovery of global economy and eased oil prices.

This month’s decision to keep the rate unchanged, which was made unanimously, was in line with analysts’ forecast as the central bank hopes to pause to assess the impact of Brexit and the upcoming supplementary budget.

The BOK head said that the central bank will maintain its expansionary tone going forward, leaving doors open for a further rate cut from the current record low of 1.25 percent.

Analysts also predicted that there will be one more rate cut toward the second half of this year as it seeks to spur growth amid unfavorable market conditions.

The BOK’s rate cut last month took markets by surprise as many analysts expected the decision to come later.

“We expect another 25bps BOK rate cut in the fourth quarter,” Park said. “This would take the policy rate to a record-low 1 percent.”

He added, “While inflation is lowering, we think the high youth unemployment rate, tepid domestic data and market volatility warrant another rate cut this year.”