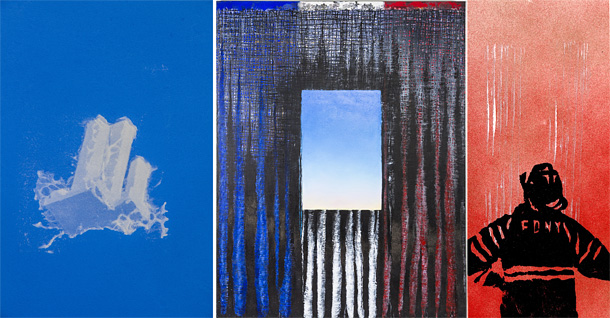 Artworks on display at a special 15th anniversary exhibit at the 9/11 Memorial Museum. From left: “World Trade Center as a Cloud” by Chris Saucedo; “9-11 Elegies” by Ejay Weiss; “Gesture” by Manju Shandler. [AP/NEWSIS]

NEW YORK - To mark the 15th anniversary of the terror attacks, the 9/11 memorial museum is staging a major special exhibition. It features artists who have transformed a day of terror - often with personal links - into works of both grief and tenderness.

Brutal reality still dominates the display opening on Sept. 12. Scorched and torn business papers from the collapsing towers and radio transmissions from the fiery pit are part of the collection titled “Rendering the Unthinkable: Artists Respond to 9/11.”

Thirteen artists contributed paintings and a sculpture, as well as works on paper and video.

Brooklyn resident Christopher Saucedo created his papier-mache artwork, “World Trade Center as a Cloud,” as a way to remember his firefighter brother, whose remains were never found.

Monika Bravo, a native of Colombia living in Brooklyn, had filmed a thunderstorm passing over the city on Sept. 10, 2001, from her studio on the 92nd floor of the north tower. The footage is now condensed into a piece dedicated to a fellow artist who died a day later in the same tower.

“Through the lens of art, we reflect on the raw emotion we all felt on that unforgettable Tuesday morning 15 years ago,” said Alice Greenwald, the memorial museum’s director. The artists are not asking “that we revisit the horrors of that day but that we try to make sense of what was left in its wake.”

Along with human bodies that came tumbling down from windows outside the inferno were business communications with the world. A rumpled sheet in Japanese and an application for a marketing job written days before the Sept. 11 attacks - once just ordinary items - now reflect the “unthinkable” assault.

The papers, many in pieces, were blown out of the disintegrating skyscrapers and landed as far away as Brooklyn across the river. A soundtrack features recitations of various papers’ contents.

The exhibition was assembled by the National September 11 Memorial & Museum that oversees two reflecting pools bearing the names of the nearly 3,000 people who died on Sept. 11 in New York, Washington and Shanksville, Pennsylvania.

The display is the first in the museum’s special exhibition gallery where various 9/11-related topics are planned in the future. AP