PAC revealed to media to allay fears of Thaad radar

PAC revealed to media to allay fears of Thaad radar 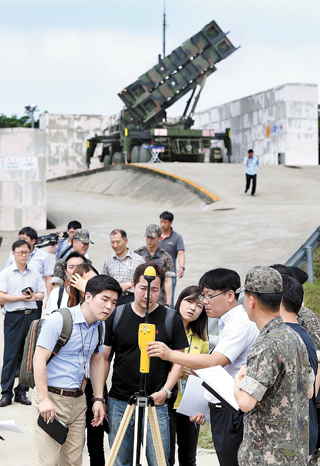 Reporters watch a Korean Air Force official measure the electromagnetic waves emitted from a Pac-2 radar in order to confirm its safety level while at an undisclosed metropolitan missile unit revealed by the Ministry of National Defense on Thursday. [MINISTRY OF NATIONAL DEFENSE]

In an attempt to alleviate continued public concern over electromagnetic waves emitted from the Terminal High Altitude Area Defense system (Thaad) system, the Ministry of National Defense revealed to the media for the first time on Thursday its Patriot interceptor and missile-detecting Green Pine anti-ballistic radar units.

The Defense Ministry revealed to reporters the Green Pine unit, located in the Chungcheong region on a mountain 400 meters (1,312 feet) above sea level, in an attempt to show their safe operation by sharing the emission rates from the activated radars.

Since 2012, the South Korean military has deployed two Israeli Green Pine radar units, which have a range of over 500 kilometers (310 miles) and are used to detect North Korea’s ballistic missile launches.

On the same day, the Korean military likewise revealed its PAC-2 (Patriot Advanced Capability-2) system, meant to strike down descending missiles, located 300 meters above sea level in a metropolitan area.

A defense official emphasized that the purpose was to show that the electromagnetic waves emitted from radars will not cause health problems for the residents of Seongju.

The locations have been kept secret in the past and the ministry requested that the exact site not be disclosed.

The Defense Ministry announced on Wednesday that Seongju County in North Gyeongsang, located in southern-central Korea, would be the site for the deployment of the Thaad system.

People have since raised concerns over electromagnetic radiation exposure from its Army Navy/Transportable Radar Surveillance, or AN/TPY-2, radar. They are concerned over its risks to health and agricultural produce.

Thaad’s high-resolution, rapidly deployable X-Band radar is designed to detect, track and identify ballistic missile threats at long distances and at very high altitudes and is a key component of a Thaad battery, which contains six mobile launchers, 48 interceptor missiles and a fire control and communications unit.

Like the Thaad’s radar, Green Pine’s radar is also emitted five degrees above ground. The Defense Ministry, citing U.S. assessment reports, have said the safety distance around the radar is a radius of 100 meters, but this has been contested by some analysts as being much greater.

The electromagnetic emission from Green Pine is stronger than the Thaad’s radar, and the safe distance is 530 meters as opposed to 100 meters for Thaad, according to military officials.

The ground-based Green Pine radar was one of the methods the South Korean military traced the Pyongyang’s long-range missile launch on Feb. 7. A military official said, “The person who is most exposed to electromagnetic waves will be the radar mechanic.”

The Green Pine radar is located 1 kilometer eastward from the nearest residential area, while Thaad will be placed 1.5 kilometers away from Seongju. For the Pac-2 system, the electromagnetic waves 20 meters away after six minutes after activation of the radar peaked at 0.2826 Watts per square meter at an average of 0.0735. This falls just 2.8 percent of the maximum amount permitted under Korean laws.

An army official said, “In Seongju, North Gyeongsang, the location where the Thaad radar will be placed is so far away from residential area that houses can’t be even seen from there. There will be no adverse effect from electromagnetic waves.”