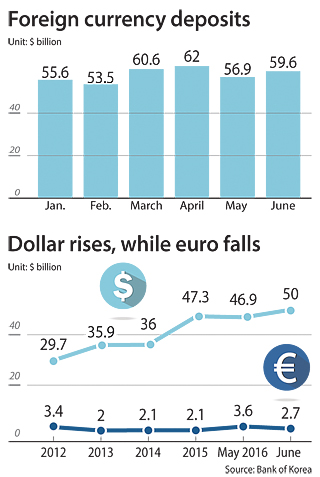 The figure includes foreign currency deposits held by Koreans, expatriates and both domestic and foreign corporations that have been in the country for more than six months.

According to the Bank of Korea (BOK) Friday, dollar-denominated accounts stood at $50 billion, making up 83.9 percent of total foreign currency deposits. Dollar deposits rose $3.1 billion compared to the previous month.

However, euro deposits fell significantly, from $3.63 billion to $2.73 billion in June. The month-on-month drop of $900 million is the biggest since October 2000, according the BOK.

“A large number of institutional investors withdrew their investment funds, and it appears that the United Kingdom’s decision to leave the European Union might have affected the figure for June as well,” said Ko Seok-kwan, a director at the BOK.

The referendum that led to the so-called Brexit was held on June 24. The BOK said investors and individuals holding euros withdrew their money deposited in Korea last month as they worried about the currency’s value weakening compared to the won.

The BOK added that the euro figure drop could also be attributed to a large transfer of money last month by a local company. CJ CGV, the country’s largest theater chain, recently acquired Turkey’s biggest chain, Mars, and the transaction was made last month.

The amount transferred was some $500 million in euros, accounting for 55 percent of total euro decrement, according to the BOK.

Dollar-denominated accounts continued to rise recently as Korea’s current account balance recorded a surplus for more than 50 months straight, which means exporting companies making their profits in dollars have more in their savings.

Chinese yuan deposits rose $280 million compared to the previous month to reach $3.6 billion last month as Chinese financial institutions operating in Korea have offered relatively high interest rates, according to the BOK. In fact, deposits in Chinese foreign institutions in Korea rose $870 million to $4.93 billion during the same period.

Among the total deposit amount of $59.61 billion, 86 percent of it was held by both domestic and foreign corporations. Deposits by companies went up $2.2 billion from the previous month to reach $51.29 billion last month, and the figure for individuals rose $560 million to $8.32 billion.