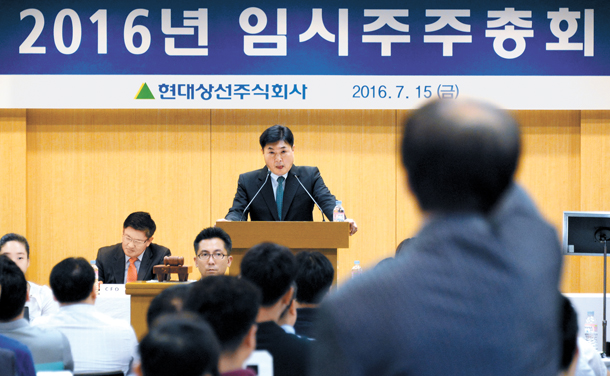 At a shareholder meeting Friday, Hyundai Merchant Marine reduced the equity of its major shareholders, amid a global industry slowdown and domestic restructuring. The company also joined 2M, the world’s largest global shipping alliance, in an effort to stave off a collapse.

Shareholders accounting for 93.9 percent of attending stocks agreed to the measure. Through this move, the 7.25 million shares owned by major shareholders including Hyundai Elevator and Hyundai chairwoman Hyun Jeong-eun will be reduced to 1,035,900 shares.

The number is expected to fall even lower if a debt-for-equity swap occurs as planned. According to the company, corporate ownership will be transferred to creditors, effective July 25. 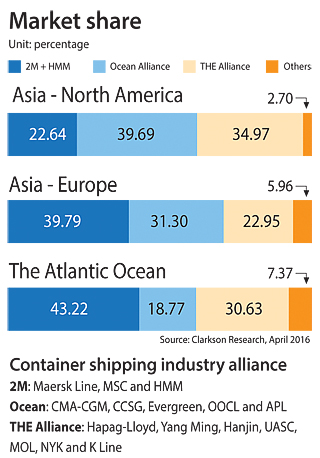 The fulfillment of these conditions cleared the way for the 2.48-trillion-won recapitalization headed by main creditor Korea Development Bank. Roughly half of this number is bonds owned by creditors, private investors and shipowners, while another half will come from additional public offerings and equity swaps.

HMM’s financial structure is expected to improve greatly. The company’s debt ratio is set to fall below 400 percent, and also it can order super-sized, high-efficiency cargo ships based on the government’s shipping fund. A debt lock-in period and interest rates will also be adjusted for a smoother cash flow.

HMM said earlier on Thursday that it signed an agreement with the 2M alliance of Maersk Line and Mediterranean Shipping Company, the two largest shipping container companies in the world. If no problems surface, HMM will begin operating within the alliance in April of next year.

The two European shipping giants haven’t accepted another corporation into their alliance since 2M’s establishment in January 2015. By aligning with the two companies, HMM may create synergy in its business area.

“Initially, HMM thought that it wasn’t good enough to join the 2M, so it tried to join the Alliance,” said an industry insider. “But it kept up its relationship with 2M, which offered first to embrace HMM after confirming that there is hope still.”

He added that 2M extended its hand to HMM because the Korean company has potential in the U.S. and Europe. “2M is centered around Europe, so an ally like HMM can boost its area of influence,” he said

Hyundai Merchant was established in 1976 as Asia Merchant Marine, starting with three crude oil carriers built by Hyundai Heavy Industries that were rejected by contractors due to the 1973 oil shock. The company merged with Shinhan Merchant Marine, founded by Hyun’s father in 1985, and management was transferred to Hyun when her husband Chung Mong-hun died in 2003.

Although HMM appears to be in safe territory, Hanjin Shipping is still wandering in choppy seas. Hanjin, Korea’s largest container carrier, faces charter fee negotiation and debt restructuring that has to be completed by August 4. Although the deadline can be extended for a month, creditors have emphasized that no additional support will be given, so the company is concentrating on securing liquidity.