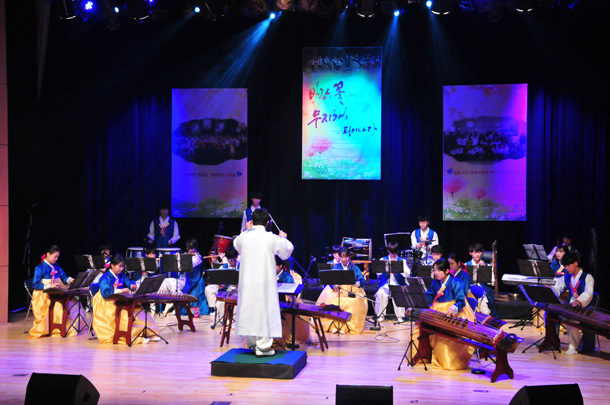 “This may be our last concert, but we want to continue going to class.”

This is the single hope of seven members of the Anemone Korean Traditional Music Orchestra, also known as Anemone Orchestra, based in Jeonju, North Jeolla. The orchestra will hold its fourth regular concert on July 22, but the upcoming concert is likely to be its last.

Seven of the orchestra’s members are 12th graders who will soon graduate from high school. Their subsequent absence will place a burden on the orchestra. Anemone Orchestra has a total of 32 members, ranging from elementary to high school students.

They all live in Samsung Human Ville, an orphanage located in Hyoja-dong, Jeonju. Some of them have no idea where their parents are. Twelve players of the Jeonbuk Provincial Institute for Korean Traditional Performing Arts have been visiting the orphanage once a week to teach the children one-on-one. As the concert has been nearing, they have been having practices twice a week.

“It felt very awkward to play the instrument on the first day,” said one 13-year-old boy. “They helped me learn to read musical scores and play the geomungo.”

The orchestra was created in August 2012, based on the model of El Sistema, an orchestra for children living in poverty in Venezuela. The provincial institute proposed free talent donations for the children, and Hyundai Motor’s Jeonju-based factory donated 50 million won ($44,188) for them to buy instruments.

For the past five years, Anemone Orchestra has had a total of 15 stage performances including the four regular concerts. It held free nanum, or “sharing,” concerts six times this year already, including one in which it played in front of 50 senior citizens and handicapped people in Gochang, North Jeolla in January.

“I was impressed by how some of our naughty kids who used to ran away from making their beds or doing other chores then became more serious as they learned to play their instruments,” said Kim Mi-ae, a social welfare service provider at the orphanage.

Kim Jong-gyun, a strategy manager at the institute, said his institute plans to continue offering music lessons to the children.

“It might be hard to maintain the orchestra but we plan to keep teaching them,” Kim said. “We are also considering plans to form an orchestra consisting of children from multinational homes.”