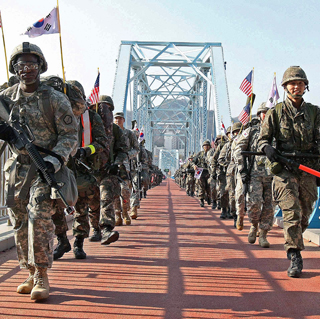 Over the course of this year’s presidential campaign, candidates have questioned America’s commitments to our Asian allies and partners, including Korea, asserted American leadership in world affairs is declining, and suggested that we ought to negotiate better deals with our partners and allies. But, given North Korea’s recent nuclear and missile tests and its continued provocations, nothing could be more wrong-headed or reflect a more profound misunderstanding of the value of our Asian alliances as we enter a new era of global competition. For America to continue to lead the international community, we need to double-down on our alliances and partnerships, not pull back from them.

We know there are those in the region who question America’s intentions and endurance, or wonder if they can continue to count on U.S. creativity, ingenuity and the robust American engagement that has underwritten the region’s stability and growth for the past 60 years. But no one should ever doubt America’s resolve to continue to strengthen the rules-based-order and architecture of the Asia-Pacific region, or our deep and abiding commitment to our alliance as evidenced by our willingness to construct a strategic framework that will ensure the security of the region for another 60 years and well into the future. Any political rhetoric to the contrary, any talk of pulling back from our commitment, should be taken with than a grain of salt on both sides of the Pacific.

Earlier this year, new U.S. sanctions on North Korea passed the Senate 96-0 and passed the House 408-2, underscoring America’s commitment to South Korea. And next month, the United States and the Republic of Korea will conduct the alliance’s annual Ulchi-Freedom Guardian (UFG) exercises, a statement of our resolve to protect and defend the Korean people from Pyongyang’s depredations, and of the importance of our close continuing military cooperation.

The United States brings to this partnership unique defense capabilities in the form of 28,500 service-members stationed in Korea and our extended deterrence commitment, including missile defense and nuclear umbrella. With new capabilities being developed under the Pentagon’s “third offset” strategy, the United States seeks to work with our Korean alliance partner to build and extend a defense posture on the Korean Peninsula that will deter the North and, if need be, repel it.

At the same time ,South Korea is working to hold up its end of the alliance in investing in the weaponry and infrastructure the country needs to ensure its wartime readiness plans are capable of decisively repelling an attack from the North. After all, no country has more to lose if there is war on the peninsula than South Korea. Wartime readiness is paramount in the minds of South Koreans and South Korea’s investments in its military preparedness necessarily extends to the hardening of vital infrastructure such as communications systems and power plants, and the maintenance of transportation networks such as a diesel locomotive fleet that can sustain the military and civilian populations in the event of Pyongyang acting on its often-made threat to disable the country’s power grid. The fact is, this alliance is not some simple transactional deal to be renegotiated for a better price, but reflects the shared cultural values and commitments that bind our two nations together.

At the end of the day, foreign policy is built on shared values and I’ve seen the results in our men and women in uniform standing together on the DMZ, reaffirming the promise that has been at the core of our alliance for sixty-one years: “katchi kapshida,” we go together.

No time is better to remind Pyongyang of this promise than now, in the wake of North Korea’s 7th Congress of the Workers’ Party, the highest political gathering in the country in a generation, and while North Korea’s rubber-stamp parliament meets to ratify the dictates Kim unveiled there. His efforts to restructure, whether Kim calls it the State Affairs Commission or the National Defense Commission, are meant to cement the hold on power of a regime that exploits and abuses its people and violates international will with malice.

But the best measure of the strength of the Washington-Seoul relationship — one where there is a return on investment that benefits the American economy — is the “Korean miracle” and Korea’s transformation from a war-ravaged country with crushing poverty to one of the world’s most dynamic and innovative economies.

So long as Pyongyang engages in provocations, they must understand that there will be no rewards. The continued pursuit of nuclear weapons and advanced ballistic missiles will not produce security for the North, and will not drive a wedge between the United States and the Republic of Korea. It will only result in a stronger alliance with South Korea, and in stronger international sanctions and condemnation.

The sacrifices of the United States for the defense and the security of the Korean people and the Republic of Korea — and our commitment to our mutually beneficial economic partnership — will never waver. The United States stands beside Korea in the desire of the Korean people to see the freedom, dignity and economic opportunity enjoyed here and in the Republic of Korea shared throughout the Peninsula, and for the Korean people to be united and free. The strength of our alliance is in the values we share and our work together for an alliance poised to meet the challenges of the 21st century, not in the deals we can renegotiate,