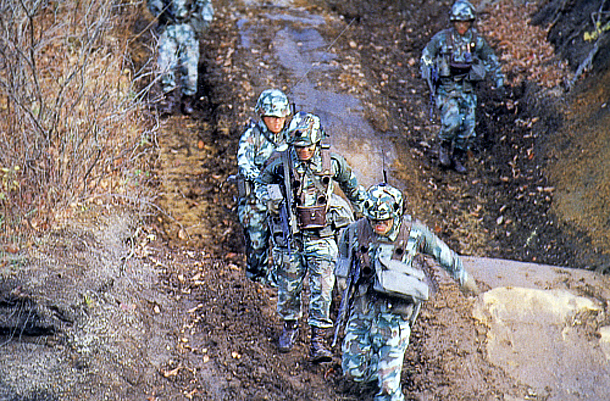 On May 23, a shooting accident occurred in a Ground Self-Defense Force training facility in Hokkaido, Japan. During an exercise of transport unit engaging with enemy forces, live bullets were fired instead of blanks. Nine SDF members shot 79 live rounds at other members, who were playing virtual enemies. They did not realize that the rifles were loaded with live rounds. The accident could have resulted in major casualties, but the drill was stopped when two members suffered injuries by splinters. Not just the defense ministry but also the entire society was stirred. They said the accident was “unimaginable” and “intolerable.”

The SDF investigation revealed fundamental mistakes by the member in charge of the ammunition supply. As he was not familiar with the job, he had copied the paperwork prepared for an April drill involving live rounds and requested the same bullets. Rather than blanks, he entered the number for live bullets.

But the transport unit that was given the bullets neglected their duty to check the rounds before distributing them to the self-defense force members. While the top parts of the live and blank bullets are shaped differently, they did not notice. They opened the box and checked the numbers by only looking at the bottom part without checking the bullet type indicated on the box.

People often fail to perceive the unexpected. We tend to see only what we want to see. In the airport security check, when the guards have tacit expectation that they are not likely to find weapons, the detection rate would be considerably low. The belief that people won’t dare to bring in weapons would make the guards blind. It is called mental scotoma, failing to see an object or possibility due to prejudice. When you are biased, you fail to see the whole picture and have a tunnel vision of partial visibility.

Caltech professor Shinsuke Shimojo analyzed the cause of the shooting incident as mental scotoma in Asahi Shimbun’s online magazine Webronza. It is highly likely that the person in charge of ammunition procurement didn’t even think to distinguish blanks from live rounds.

He must have been focused on the application procedure. The members of the SDF must have had groundless convictions that they cannot be live bullets. When the false belief became stronger with no reasonable doubts, the actual risk grew exponentially.

Professor Shimojo wrote that fragmental facts are hidden in layers once they fall in blind spots, and incomprehensibly complicated risks could be underestimated. He emphasized that “unimaginable accident can actually happen.” It is a warning that Koreans also need to keep in mind as we have experienced safety-related accidents.

*The author is the Tokyo correspondent of the JoongAng Ilbo.