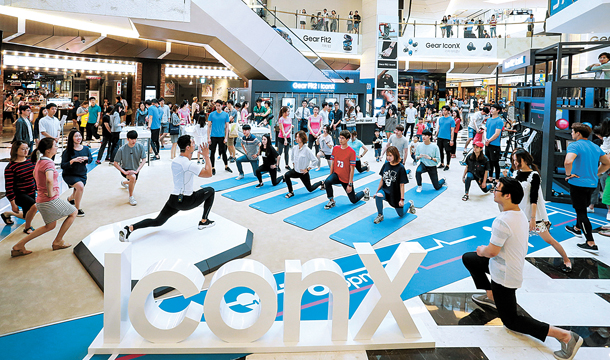 A group of customers take yoga lessons while wearing Samsung Electronics’ wearable devices Gear IconX and Geaer Fit2, which have enhanced fitness services, at IFC Mall in Yeouido, southwestern Seoul. The world’s largest smartphone manufacturer hold such events during on weekends starting Friday as a promotional event for the launch of the Gear IconX and Gear Fit2.

Meanwhile, Samsung Electronics on Sunday announced that it has become a board member of the White House’s Advanced Wireless Research Initiative (AWRI).

The private-public partnership consisted of global IT companies including Nokia, Qualcomm, Intel and Oracle as well as 400 university researchers who are dedicated to developing new technologies such as 5G and IoT. [NEWSIS]