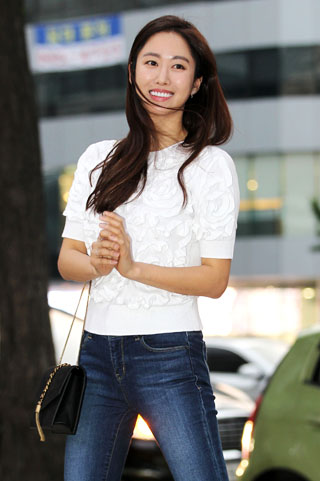 The recent cable drama series “Oh Hae-young Again” has already set a number of records. Without the benefit of big-name actors, the series has managed to earn an average of 10 percent viewership, a feat for any cable drama series, and in the process the romantic comedy has also rediscovered a few notable talents.

One of them is singer-turned-actor Jeon Hye-bin.

Starting out in 2002 as a member of the now-defunct three-member girl group Luv, Jeon stole the limelight upon her debut with her good looks and signature dance moves, but the fame didn’t last.

After her group disbanded, Jeon made several forays into acting and has been slowly building up her career over the past 15 years, but she never really had a chance to play a life-changing character until she was offered the role of Hae-young in “Oh Hae-young Again.”

Just like their different nicknames, the two women, who first met back in high school, live very different lives.

Unlike the over-achieving Pretty Hae-young, who seems perfect in every way, Just Hae-young goes through a series of misfortunes. She is dumped by her fiance just one day before her wedding and then overlooked for a promotion at work.

Ilgan Sports, an affiliate of the Korea JoongAng Daily, recently met Jeon for an interview. Despite the huge success of the series, Jeon was rather calm and said, “None of my previous work received this much love and attention before.” Although she plays a perfect woman on camera, Jeon said she wishes to “play a character who is loved” next time.

Here is an excerpt from the interview.

Q. The drama ended with a whopping 10 percent viewership. What was it like to watch the very last episode?

A. Actors who could make the time gathered and watched it together. We all cried. The director couldn’t come because he had to edit the last episode, but he sent us a message and said we all did a great job. It was touching to read that.

Are you ready to move on to other work and leave Pretty Hae-young behind?

I was feeling blue at one point, maybe because I was so into the character. But I feel grateful that the drama series was much loved by viewers. I didn’t really expect it would become so hugely popular. And I’m grateful to the writer for developing more stories for my character. Otherwise, Pretty Hae-young would have remained two-dimensional and mean.

Until the drama is halfway through, Pretty Hae-young is depicted as a character who interrupts the romantic relationship of her friend, Just Hae-young.

I felt insecure because of that but the viewers began to relate to my character as the story developed.

If you could make a choice between Pretty Hae-young and Just Hae-young, which would you would like to be?

Of course, Just Hae-young because I want to be loved. Pretty Hae-young has always been hungry for love. She misses her parents’ love. She still loves her ex-boyfriend but her ex just pities her. She’s not loved by anyone.

I was under a lot of pressure because I had to look pretty, but the lighting director did a great job. All the scenes in which I look pretty, that’s mainly due to lighting.

“Oh Hae-young Again” is a story that encourages people to be honest with their feelings and to be brave about love. What kind of person are you when you’re in a relationship?

I began working [in show business] when I was young and I didn’t really have a chance to learn how to be honest with my feelings. It also takes quite a long time for me to fall in love. I learned a lot from Just Hae-young, who is straightforward when it comes to love.

Was there any tension between you and Seo? You’re both singer-turned-actors playing roles with the same name.

No, not at all. She’s very friendly. On the last day of shooting, she brought a cake to the set. That was touching.

Your film “With or Without You” has recently been released.

Thanks to the popularity of the series, many people are paying attention to the film, too. Since it’s is a low-budget film, I wasn’t sure whether it would be released or not.

Do you have hard time in your relationship in the film, too?

Yes. But there aren’t many roles I can choose. I’m just grateful for any character. I want to keep growing as an actor.